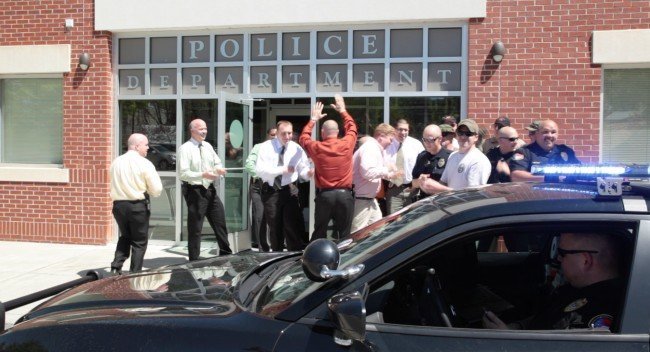 In the past week or so there has been rumblings from some about the Wake Forest Police Department. WFPD, like any organization is made up of individuals that have great days and crappy days. Nobody is perfect. I thought I was but my wife reminds me that I’m not.

So this might be a good opportunity to talk openly about the WFPD and I guess police in general. So much stuff about other cities has been in the news lately that it has created some police fear.

But police fear comes in different flavors. Some citizens, no matter where they live, are afraid of the police. And I’ve heard numerous statements of people of different backgrounds who have been upset, and often rightfully so.

But what happens in Cleveland is not what happens in Wake Forest. Wake Forest is not Baltimore. While there might be a greater national conversation to be had about policing and citizens, that’s not the scope of my article today. But then again that’s been an ongoing conversation since I was a kid, 55 years ago. My 84-year-old father has stories he’s shared from when he was a kid in Michigan as well.

WFPD officers are people who, in my experience, want to do a job of protecting and serving the citizens of Wake Forest. Some people think cops just want to flex authority and power and feel big. Maybe some do. But the tradeoff for that is they put their life on the line every single day. They get in fights, perps try to grab their guns, they chase bad guys in dark places, they are constantly under threat from being sued and doing the wrong thing in a split second. They make the wrong choice and they die or their partner dies. They make the wrong choice and someone else might die.

The average age of a career police officer is ten years shorter than for you and I. They die early because the cumulative stress of the job, risks, and responsibilities kill them. So understanding this, if some police officer is having a bad day and might be a little slow on his customer service skills, I’ll gladly cut him or her some slack.

But that doesn’t excuse abusive behavior.

I can honestly tell you without a doubt that the Wake Forest Police Department absolutely wants to hear from anyone who feels they have not been treated fairly. And rather than just complaint to friends about a perceived indignity, complain to the police department and file an official complaint. Management (command structure) will honestly look into your complaint and utilize the tools at their disposal to investigate. These tools include dash camera footage, radio calls, and body microphones. There is a lot of documentation available of an incident.

Being pulled over by the WFPD is not like going to Las Vegas where stuff stays. The incident is recorded for review and that documentation will support your claim if the officer was wrong.

And if you have run through the complaint process and feel like the issue was not resolved, then contact one of the Wake Forest media outlets like the Wake Forest Gazette, Wake Weekly, or even myself.

The underlying complexity of a WFPD interaction or interaction with any police department is the individual fears and worries that each party brings to the event.

You might be thinking you were unfairly pulled over, not realizing you might have lights out or you really were weaving while texting. I was behind a postal truck the other day that was all over the road, When I pulled next to them that’s exactly what the driver was doing, texting.

When the blue lights go on and you pull to the side of the road, take a deep breath and be patient. All should be explained.

The best course of action is to comply with the officer at the scene, be calm enough to take down names and if you feel you were treated unfairly. Then file a complaint with the Wake Forest Police Department or politely ask to speak with a shift supervisor.

The Wake Forest Police Department deserves our respect, we should give them the benefit of the doubt, we should always wave of officers, thank them for their service, and most importantly keep in mind they are generally great people doing a tough job under difficult choices.

I can’t think of the last time someone was shot in the face getting a price check on aisle five. But I can think of instances were an officer lost their life on a routine traffic stop.

Wake Forest Police might not be perfect but they try hard and those that don’t make the cut, are fired. The WFPD doesn’t want marginal cops on the force, they want great cops. All WFPD officers are under constant pressure to perform professionally according to policies and state law.

I don’t have a man crush on the WFPD but simply recognize policing is a complex issue and more communication, openness, understanding, and mutual concern are always a good thing. We can all get along and as residents of Wake Forest we should be proud of the job they do on a daily basis. I know I am.

Listen to 911 Call From Murder in Wake Forest

The 911 call concerning last night’s fatal shooting is in the post. WARNING: It may …