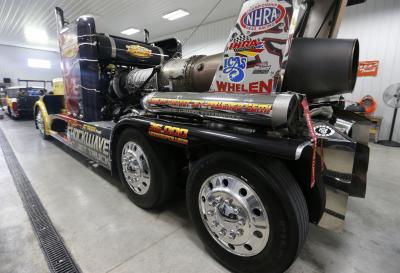 SPRINGFIELD, Mo. — Ambulances, law enforcement officers and several emergency responders rushed to a property in southwest Missouri upon receiving a report of a possible plane crash.

Instead, they found a man washing his jet-powered semi — named “Shockwave” — on Monday afternoon.

Darnell said he recently raced the vehicle, which can reach 376 miles per hour, on a dirt course so it needed to be washed on Monday, the Springfield News-Leader (http://sgfnow.co/1MkLb1e ) reported. To wash the 36,000-horsepower truck, Darnell has to use its jet engines, which causes a lot of noise and white smoke.

“We do it from time to time and it will usually generate a couple of 911 calls, but today for some reason it brought out a whole army of emergency vehicles,” Darnell said. He also said he doesn’t blame the neighbors for being concerned.

A Greene County sheriff’s deputy told the newspaper that no citations were issued and that the 911 callers had acted in good faith because they believed someone might be in danger.

Darnell said he takes Shockwave to truck shows across the country, where it does things like setting stacks of cars on fire or racing fighter planes.