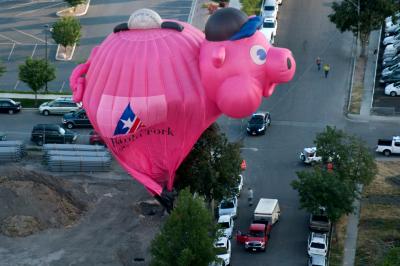 PROVO, Utah — The pig couldn’t fly, the cowboy got away, and the pilot’s OK.

So it went Thursday at an Independence Day festival in Utah, where officials said a pig-shaped hot-air balloon descended quickly to the ground after hitting a Wyoming cowboy-themed entry.

Paul Warner, a festival executive, said the licensed pilot of the fallen balloon suffered minor burns to his face. He was treated at the scene and released.

The balloons were rising at a field near downtown Provo when the top of the pig entry crashed into the basket of the cowboy balloon. The collision ripped a hole in the nylon fabric of the pig balloon, and a piece of plastic caught fire as it descended.

The fire was not extensive, said Christopher Liechty, a spokesman for Bank of American Fork, which sponsored the balloon known as Seymour, its piggy bank mascot.

The pilot, Erwin Oertli was the only person in the balloon and suffered minor burns from melted plastic that dripped onto his face, the bank said in a statement.

“What saved my bacon, was that the head of the pig held a lot of hot air and helped the balloon to descend at a safer rate,” Oertli said in the statement.

Witness Kevin Auernig, 37, of Provo said he saw the accident at America’s Freedom Festival Balloon Fest and watched the pig balloon come down fast and land in a fenced construction zone. He joked that parts of the balloon got stuck on a tree and looked like strips of bacon.

People jumped the fence to try to help the pilot, who was bleeding and appeared shaken up, Auernig said.

“We were trying to help him but the balloon was still on fire,” he said.

Warner said the pilot responded wisely by gliding the damaged balloon slowly despite the fire.

“The pilot, who is an excellent pilot, was able to control it as well as probably can be done,” Warner said. “He kept both of his burners going so that he could descend slower.”

There were no injuries reported among the thousands of spectators at the festival.

The cause of the collision remained unknown, and the Federal Aviation Administration is investigating.

Warner said it wasn’t necessarily due to pilot error.

“Just one of those things that can happen when you’re under the wishes of the wind,” he said.

The cowboy balloon was not affected and kept flying with the other 30 balloons. The festival was expected to continue through Saturday.