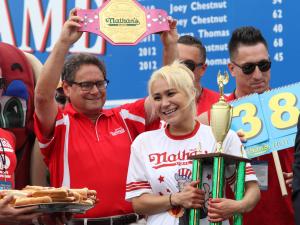 As thousands of spectators observed the eaters on an elevated stage, the next closest competitor ate 35 hot dogs.

“I trained hard for this. This is actually amazing,” Stonie told ESPN, which broadcast the competition live like the major sporting event its biggest fans say it has become.

Afterward, Stonie, holding his fist in the air in victory, said he came into the competition confident and prepared in his quest for the $ 10,000 prize and the coveted mustard yellow winner’s championship belt.

“We don’t just go up there and eat hot dogs. We practice for this. We prepare our bodies,” Stonie said. “It was a tough contest. Joey brings it all. I had to push really hard to beat him. But I feel great.”

Stonie had defeated Chestnut in the past year in competitions featuring Twinkies, poutine, pumpkin pie and gyros.

Chestnut, smiling in defeat, said he was slow and couldn’t catch Stonie, who entered the match weighing just 125 pounds to Chestnut’s 230 pounds.

“I’ve been looking for competition for a long time and I finally have it,” he said, vowing to return next year. “He made me hungry.”

Chestnut, 31, had built himself into a champ with his string of victories, which included setting the record in 2013 by swallowing 69 franks. He twice reached 68 but last year had fallen off to 61.

After his victory last year, he dropped to one knee and proposed to his longtime girlfriend. They have since broken up.

Early in the contest, Chestnut seemed to have a slight edge but Stonie moved ahead by half a hot dog after 3 minutes and never looked back.

The men’s contest came more than an hour after the women competed, with defending champion Miki Sudo capturing first place with a flourish that emphasized strategy rather than condiments.

The Las Vegas woman ate 38 hot dogs and buns in 10 minutes to claim the title for the second straight year, along with the $ 10,000 that comes with it.

Sudo employed a successful strategy of eating the hot dogs separately from the buns and swallowing the buns after first dipping them in Crystal Light.

Security included police dogs that apparently were not thrown off by the scent of the grilled meat, along with police officers on rooftops.