I’m tired of running into Baptist all over town (don’t they know this town has a “no solicitation” policy?), so I’d love to know how many atheists live in Wake Forest, and where do they hang out?

Even though I’m just a squirrel, I still get what you are talking about.

It does get to be a bit overwhelming at times. One of my favorite servers in town a year or so ago, that fed me scraps all the time, asked me for my email address and now all I get are invitations to fund every movement on their secret religious mission in the Middle East. Yes, even squirrels have a gmail address these days. We are not all nuts. Nuts? Where?

It seems you just want to order the next person who tosses a religious pitch your way, a hot steaming mug of STFU.

But us squirrels are so cute, we can get away with that, you probably can’t.

Look how cute we are.

It’s not all bad news. The overflowing “Baptitis” does provide some welcome entertainment as well. A while back I were was sitting in one of our fine local establishments waiting for stuff to fall on the floor to steal, and overheard this conversation between two seminary students.

She said, “Have you studied for the theology & culture class?”

She said, “But the test is tomorrow. What are you going to do?”

Yea, let’s go with that plan. Even for a squirrel that doesn’t seem like it’s going to turn out well. But hey, what do I know, I’m just an squirrel with a Ph.D in acorns. But my Ph.D stands for piled higher and deeper.

The Baptist students are certainly welcome in town. But they really should feed my friends more. And what’s with those traps on campus over near the gazebo. Someone there knows what I’m talking about. Not cool SEBTS.

Baptist student money is green and they provide a nice economic stimulus to local businesses. That’s the good part. I’ve never heard one of those suckers offering to trade prayers for a pizza, yet. Yet!

Everyone is welcome in squirrel Wake Forest. We even love those pesky mice. But they do need to grow a more respectable tail.

Personally as a squirrel, I’m a practicing Frisbertarian. When I die my soul will go up on the roof and get stuck.

Before I migrated on the back of a fast moving 18 wheeler to Wake Forest I used to live further down in our country among the mightier oaks, closer to the Bible belt buckle.

Down there everything was frowned on. No dancing, no secular music, no unblessed chewing tobacco, no booze, and they probably had a problem with bowling as well.

Consider this, we might have a Baptist college in town with a lot of those Jesus peeps but we also have a brewery right on South White Street. Go White Street Brewing Company. Winnie the Squirrel says “Hey!”

The Baptist can provide a much needed distraction. Just keep your ears open for the entertainment value and overheard conversations. Mine are always open. But then of course I have ADHD. Squirrel!

Don’t think the Baptist saturation is limited to just our wonderful Wake Forest. A couple of weeks ago I ran all the way over to Zebulon to watch the Mudcats play baseball, and boy were my little paws tired. Imagine, fish playing baseball. Now that’s funny. And you thought squirrels giving advice was odd.

Bet you didn’t know squirrels like baseball. You know how many nuts they sell there and people drop? It’s the closest thing I’ve got to squirrel heaven.

But don’t worry, all the good atheists are omnipresent. They are scattered about with the Catholics, Buddhist, Episcopalians, Methodist, Presbyterians, and others here in our mighty town. You might not know it but Wake Forest has 41 places of worship.

According to a report by the Pew Research Center a national survey found only 2% of people in the U.S. labeled themselves as atheist. Kind of ironic coming from an organization called Pew. But there it is.

So it appears you are outnumbered no matter where you go around our little town. But if you need a suggestion of where to congregate, how about Brooks Street Bowling Alley in Wake Forest. Their website is bsbowl.com, he-he-he, bs, and they serve food and drink as well.

Brooks Street Bowl seems like a perfect place for atheists to gather since no matter how hard I’ve watched people pray over there the balls still wind up in the gutter. 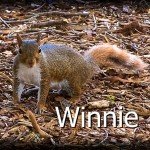 P.S. Keep your ears open for this stuff as well.

8 thoughts on “Ask Winnie – What’s Up With All the Damn Baptists?”