Trump has come out claiming he has never personally filed bankruptcy. And that is absolutely true. But in his defense he has made the case why bankruptcy is both legal and a good move at times. 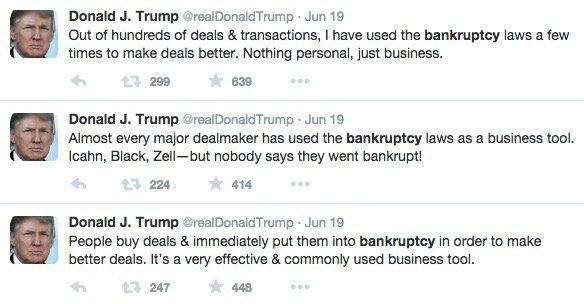 And apparently Trump gets so irritated by those saying he’s personally filed bankruptcy that he’s resorted to name calling.

It would be very difficult for Trump or anyone else to make the case bankruptcy is not a smart thing to do when an enterprise is failing or struggling. That appears to be exactly the reason he’s filed bankruptcy in his business dealings.

So if “The biggest business people have used the bankruptcy laws to their advantage” then why shouldn’t Jane and John Doe on Main Street?

The argument becomes it’s smart for business but bad for people. But what happens when not filing bankruptcy costs you your retirement. See this online calculator to discover how much limping along in deep debt will cost you when you are old and frail.

And what happens when you find out most, if not all, of the common myths about bankruptcy are just not true?

Filing bankruptcy is a smart and advantageous tool for people to consider, just like Donald Trump did for his businesses, to allow them to move forward financially. Besides, even the Federal Reserve Bank of New York agrees that people who file bankruptcy do better financially than those who don’t. And if we needed the poster child that fact is true, just look at how the personal wealth of Donald Trump has grown using the benefits of bankruptcy.

Filing a chapter 7 bankruptcy isn’t personal. And in the words of Donald Trump, it’s “just business.”