When I heard sleepy Wake Forest had a badass armored SWAT truck the first thought that came to mind was donuts. Can’t help it, my years working through college on the graveyard shift as a police dispatcher created some sort of Pavlovian response. We did eat a lot of donuts. It’s not just a stereotype.

But the second thought was a desperate curiosity about how much money the town unloaded on this thing. Those SWAT trucks can get really expensive, like a quarter million dollars or more. I knew getting to the bottom of this would take one thing, real reporting. And that’s when I knew I was in trouble. I prefer to leave the real reporting up to The Wake Weekly.

It turns out while we do have a cool looking SWAT truck in Wake Forest, the price tag was much better than expected. In fact I think every resident will be impressed to know WFPD was able to secure this vehicle for free. Totally free. But there were some issues to deal with and slight modifications to make.

The Wake Forest Police Department was given (stole) the armored truck from the Law Enforcement Support Services (LESS) program. Through this program, surplus military hardware is repurposed for local law enforcement departments. And to make the acquisition of the SWAT truck even more of a garage sale bargain, it’s a hand me down to boot. Apparently the Charlotte-Mecklenburg Police Department had first dibs on it but they but probably choked on the original color.

The armored vehicle was built for the Air Force to use for airport security in foreign lands. It did it’s job well and after many years of beer runs and video returns it was cast aside for a newer model. But when the Air Force gave the truck up it was painted a special Air Force baby blue color. When the truck arrived at WFPD it was immediately nicknamed Papa Smurf. If you look under the door lock cover you can see the original blue, Yep, definably Smurf blue.

Having some self-respect and good sense, the Wake Forest Police Department handed the vehicle to the town shop and asked, begged, to make it look tougher with a complex paint scheme, one tone gloss black. They turned a Smurf into a Darth, Vader that is.

The town shop set to work diligently ruining dozens of drill bits and cursing like sailors as they tried to drill mounts through the amor plating on the outside to put handrails on the top. They apparently came up with an alternative solution for mounting the handrails after blowing through a year and a half of their drill bit budget.

The clever town shop added running boards as well to the outside. But before you think these are a high priced special order item, back the bus up. They are actually bleacher seats used as running boards. Huh, they look familiar now, don’t they.

A double set of these bleacher boards was added to the back to prevent cops loaded in gear from slinging themselves out the back of the vehicle, only to land on the ground like a tipped turtle. Apparently that’s what happened before the running boards were installed.

Probably bad form to roll up to a bank robbery only to ask the perp to give you a hand up after you tumble out of the back, missing the original tiny step.

Underneath all the black paint and stealthy lights is a gas guzzling pig of a truck. It’s a 30 year old (1982) Dodge truck with nothing fancy on the dash or inside. From the outside you think it’s all high tech, from the inside you learn why the officers are in a hurry to get out when they can.

As far as performance specifications, the truck gas mileage isn’t even worth measuring and 0-60 acceleration is measured in minutes, not seconds. It has a top speed of about 50 MPH, downhill. If you are engaged in a high speed chase and this truck is pursuing you, pull over and wait for it to catch up.

It hits the road at least every other week or so to keep it running in tip top shape. I suggested using it for trips to Sonic but they didn’t think that was a good idea. Probably politically the right decision. Still, would be freakin’ awesome to order tater tots from this thing.

Bits and pieces appear to be hanging off the dash, even the almost air conditioning is an aftermarket item, and bolted under the dash. The only thing it’s missing up front is a pine tree air freshener hanging from a mirror and a Dashboard Jesus.

When the town shop was working on the customizing they also removed the original center bench in the back and found two clever replacements. On one side we have an old bench seat out of the back of an old Crown Vic (guessing) and the other bench looks like it was “borrowed” from a dentist office waiting room.

The officers insist they carry a lot of gear, 30 pounds to 60 pounds each, when they use the truck but I see plenty of room for Dunkin’ Donuts boxes of coffee and a couple of dozen jelly donuts. What? That’s gear.

But don’t let my criticism of the inside discourage you. The key ingredient here is the capsule of steel that covers the outside. And oh yes, the fine skilled officers on the inside. The combination of those two items make for a formable force to be reckoned with. As in “WFPD Darth just pulled up Billy, I reckon it’s time to give up.”

The truck has bulletproof glass, observation ports and gun holes. It is certainly purpose built.

The vehicle is the right tool to use in bank robbery, hostage, rescue, and deer season. In fact in one kidnapping call the truck proved its value in short order.

As police rolled up on the house where the kidnapper and hostage were, they rolled Darth right up to the front door and turned the PA system to 11. A gentle invitation to come talk to the police sitting in the armored truck on the front lawn resulted in the perp looking out the window and saying, “The hell with this. I give up!” The standoff lasted all of 60 seconds.

On future calls I think they should play the following over the PA as they roll up. What do you think?

I suggested they drive this thing up on the front lawn of a kid who skipped school. Bet you that’s the last time the kid does that.

I can hear it now over the PA, “Luke, I am your father.” Followed by, “Damn it, Luke this is your Daddy, open the damn door. Don’t make me come in and get you.”

Wake Forest PD has agreements with other neighboring jurisdictions to lend a SWAT hand if needed. But Raleigh probably isn’t going to call. They have one of those fancy city boy SWAT trucks that cost hundreds of thousands of dollars. But you know what, they might have spent more but you can’t buy cute. And our SWAT truck is incredibly sexy at free.

The one thing Darth is missing is big windows. You can certainly understand why when this truck rolls down the road it travels with an escort vehicle. You can’t see shit out the windows. I secretly think the escort vehicle has an insurance agent ridding shotgun and carrying a shotgun as well. If I was driving this I’d surely run over old people in walkers and crossing guards.

Officer Bitting was being very helpful and accommodating as he demonstrated the features of the vehicle. As he crawled in the truck to unlock the back door he did the worst possible thing he could have done with me standing there. He showed me his ass.

But as I understand it there are some wonderful ladies at the lodge who think Bitting has a fine ass. Otherwise why do they keep locking their keys in the car and asking specifically for him?

What I should have seen in my mind was the picture of a fine police officer going above and beyond to help all of us learn more about the SWAT vehicle. Unfortunately, what I did see is what’s in the image below. 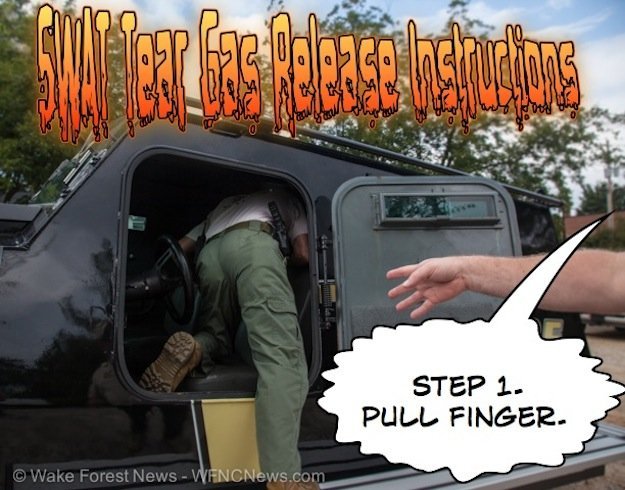 I’ve never met the Chief, yet. And who knows, maybe if he sees this I might be called into his office in not a good way. But what I can tell you after spending some time with Lt. Mike Maron and Officer Aaron Bitting is we are damn lucky to have them on our police force and it was an honor to meet them.

They made me happy to be a Wake Forest Nutter. I really do need to find out what residents are properly called. Till then I’m sticking with nutter. It has a certain je ne sais quoi to it.

We should all be really proud of these guys, the truck, and the whole damn Wake Forest police force.

All joking aside, if you happen to be the perp and this truck pulls up, let me assure you after all the chitchat and pleasant negotiation is over there is a big can of Grade A Whoop Ass in the back with the gear and coffee. It’s got your name on it.