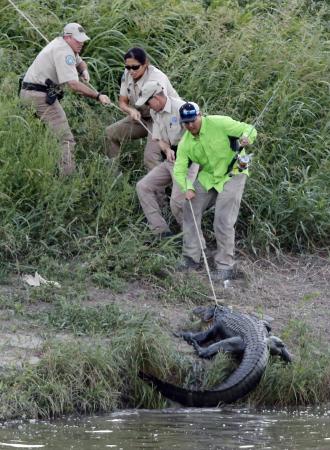 FORT WORTH, Texas — A blind alligator stretching more than 10 feet has been removed from the Trinity River in a park near downtown Fort Worth and taken to a refuge.

Stevens said the animal needed to be moved to ensure public safety.

“The problem is not the alligator — it’s the people,” he said. “Being in that high profile of a location, people are going to start feeding it, and anytime you have an alligator like this, it’s just a matter of time before people poke it.”

Stevens took the 10-foot-2-inch alligator to a nature reserve. He said it was likely blind in both eyes.

Texas game wardens summoned Stevens to help catch the alligator after several reported sightings in recent weeks. Recent heavy rain and flooding may have brought the animal to the area.

A man swimming in a Southeast Texas marina, Tommie Woodward, was killed July 3 by a 400-pound alligator.

That animal was shot and killed days later, with Woodward’s remains still inside its stomach.