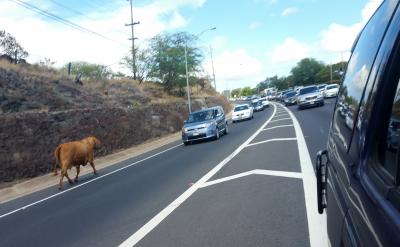 HONOLULU — Honolulu police shot and killed a cow that had escaped its pasture and was wandering around the Farrington Highway, causing major delays.

The brown cow was reported around 3:30 p.m. Thursday. Drivers watched the animal cross lanes through traffic and charge at several people.

Officers fired three shots at the cow after it had been on the side of the road for about 90 minutes.

However, owner Bud Gibson tells the Honolulu Star-Advertiser (http://bit.ly/1I8aaWp ) that his ranch hands had cut open the fence to allow the cow to go back in the pasture, making its death unnecessary.

“If you leave them alone, they’ll go back in,” he said. “Then this guy comes up and messes the whole thing up.”

Chaos caused by cars and people had the animal defending its survival, Gibson said.

“It’s sad that it happened,” he said. “We love our livestock.”

Jason Wilson, who saw the cow as it dashed around the highway and bumped into a car, said the cow looked scared.

“It was not really cool. You shouldn’t shoot a cow. It did not need to be shot,” he said.