Now here is something all of us at the Wake Forest News are 100 percent behind, faster internet in Wake Forest.

If you are saying you’d like slower internet, I understand there are some stunning housing opportunities for you in Bunn. 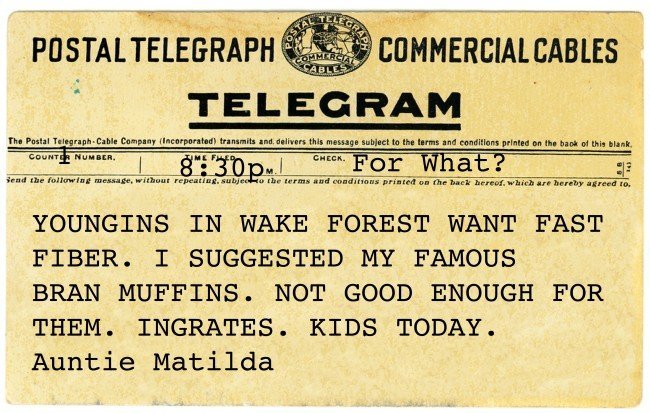 The WakeForestFiber website appears to be leading the charge for modern fast internet in Wake Forest. They even have a petition to sign if you really have a need for faster internet access. Please Sign It!

Here at WFN central our download speeds are about 31 MB per second and uploads are 5 MB per second. Not bad you say. Well if you are suffering with dialup still, you are bloody right that’s not bad.

But fiber optic download speeds can be 1,000 MB per second for downloading and uploading. We might not be bright at WFN but second grade math proved that would be a whole lot faster.

You can test your download speeds for free, here.

But on the upside, it would also improve the speed at which local business could operate and residents (Wake Forest Nutters) could get things done online and we are in favor of that.

Trust us, on your death bed you’ll never say, “I sure wish my internet was a lot slower during my life.”

Ever since Time Warner closed their little outpost office in town we’ve soured on Time Warner. That’s what happens when you are lazy. A roundtrip to the Time Warner office used to take ten minutes. It now takes more than an hour. Boo!

But faster internet in town means more people could have an alternative choice about what television programming they wanted. Some friends now are ditching their cable television bills for online services to watch television shows from, like Netflix, Hulu, and Roku, for a whole lot less money per month.

So instead of having a $150 Time Warner bill you could have a $8.95 per month Netflix bill plus the cost of your internet. If you have a cellphone, you could even ditch your landline and save that money there as well.

A rating of local internet providers in Wake Forest can be found here. Warning: you’ll want to have a tissue hand when you read the current speeds. Sobbing will ensue.

Raleigh, Durham, and Chapel Hill are all slated for fiber optic gigabit internet access but us Nutters in little old Wake Forest will probably have to make a stink to get some attention on this issue.

What do we want? Faster internet.
When do we want it? Now!