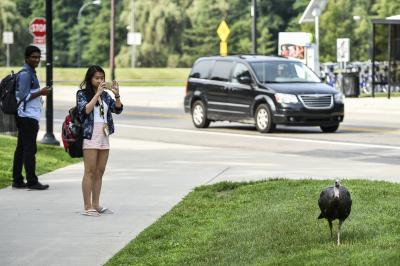 ANN ARBOR, Mich. — A wandering turkey is causing a stir at the University of Michigan.

The Ann Arbor News reports (http://bit.ly/1LZfwWA ) that a turkey has captured the attention of university students and staff as it roams wooded areas, chases passers-by and gets in the way of bus traffic. It’s also showing up on social media in people’s selfies.

The school’s deputy police chief Melissa Overton says: “He hasn’t hurt anybody, but he’s a very aggressive bird,” as well as a traffic hazard.

Police say they started getting calls about the bird in late June. A second turkey on North Campus was fatally struck by a car.

Overton says plans call for capturing the turkey so it can be relocated. She warns people not to approach the bird and to instead call police.