The people who live in the Heritage area of Wake Forest, NC and the surrounding reaches have probably driven by the Wake Forest Fire Department Station 3 on Foresstville Road a number of times. So many times in fact they’ve probably filtered it out of their consciousness.

Why yes, yes there is and besides the normal things you would expect to find there, like professional firefighters and trained EMTs to apply pressure to the toe you cut off with the lawnmower, yet again, there is also one bad ass piece of cutting edge firefighting gear we secretly think the guys there call Mildred, big red Engine 3.

Engine 3 is the most recent impressive addition to the Wake Forest Fire Department.

The 2012 Pierce Saber, manned primarily by professional firefighters who know what they are doing, is one rolling half-million dollar technological wonder. Not only can it pickup groceries like nobody’s business at Harris Teeter, but it was well designed and purpose built to provide maximum protection to Wake Forest residents and the firefighters who operate it.

The thing is so sophisticated it can’t roll over, and we are sure the guys behind the wheel have tried.

This isn’t going to be some hero piece about how awesome the crew is at Station 3. Surely one of them constantly leaves the toilet seat up at home, which is followed with, “Real heroes put the seat down, how many times do I have to tell you?”

No, those guys certainly don’t need to be told yet again they are stupid brave and critical to saving lives in our wonderful town. In fact we bet they could easily put out a fire with one hand and get hot dates with the other, at the same time. You know why firefighters date models? Because they can.

Instead of focusing on the obvious in our afternoon at Station 3, we wanted to know more about Mildred and what made her special.

One thing was abundantly clear, that inanimate object, Engine 3, is singularly loved by the crew and they baby that big truck much better than their own personal rides. We peaked in the parking lot.

Every piece of equipment has a place to live on the truck. Almost everything needed to put stuff out, pick stuff up, or save lives is located in one compartment or another. Even the hoses are rolled up in a special way specifically so they can be unrolled on the scene in the fastest most efficient way possible. Someone actually mapped that process out.

Mildred can pump, push, and power through anything possible. Think about it like this, if you were unfortunately involved in a car accident in the Wake Forest area and you saw Engine 3 roll up, you can let out a big sigh and know you are now in good hands. But let’s just hope that you did actually change your underwear today. Your mother warned you.

So Engine 3 carries all the stuff you’d expect with thousands of feet of hose, ladders, and ice water. Mojitos are not allowed on duty.

But I bet you didn’t know she also carries buckets of peat moss as well. No, it’s not for some emergency gardening stop. “Arg, look at those geraniums.” Clear!

It turns out it must certainly be some fancy $50 a bucket peat moss and is reportedly stupendous for spreading on top of errant fluid leaks following an accident. And it’s environmentally friendly as well.

Under that beautiful red skin lies the heart of a pumper. Designed to carry 1,000 gallons of water, the engine can shoot the whole wad in about 45 seconds, pumping 1,500 gallons a minute. How many gallons does a pool hold?

Engine 3 was a huge investment but Wake Forest didn’t have to pickup the whole tab. Wake County pitched in as well and supplements the cost of Wake Forest special equipment like Mildred.

See, we told you Mildred was super sexy. Here she is from one last angle. 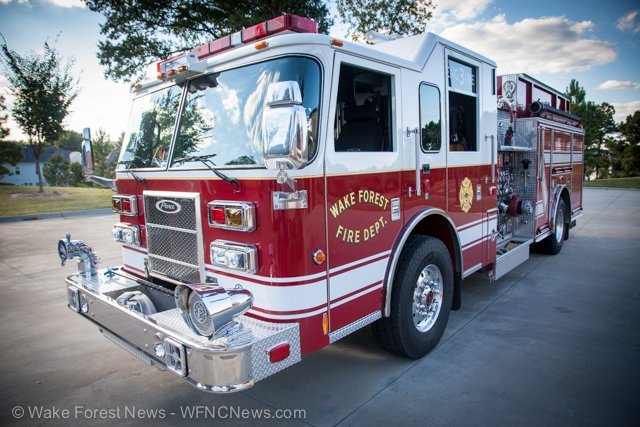 If you want to stop by and see Mildred for yourself, she’s tucked in over at Station 3.