According to the email I received and the Wellspring website at wellspringnc.com, it is a is a non-denominational Christian church. Interestingly I noticed that the domain name isn’t owned by the local church but by some company named Marketing Ministries, Inc. Why wouldn’t the church own its own domain name? But I guess those kinds of things are above my pay grade and prayer level.

I did have to love the testimonial on the marketing company page, “I want to thank you far all you have done for myself and Horn Goaltending.” You can’t imagine the visions that went through my head with that one. – Source

According to the Wellspring website, the church was founded and is led by a pastor out of Florida.

With the blessing and support of their home church, the Newkirks prayed about what city God was calling them to. After visiting several cities, God made it clear that Raleigh was the place for them! The Newkirks and their four kids settled in Wake Forest in the summer of 2014. Nearby Journey Church partnered with the vision by extending the opportunity to recruit members from their church to join the launch team of this new church. After months of building relationships and having lots of people over for dinner, Eric held the first Vision Meeting on November 16. 42 adults (and 26 kids!) attended that first gathering, many of whom committed to joining the launch team. Over the following months, many more Vision Nights were hosted, slowly growing the launch team. In March, 2015 the launch team began meeting weekly to discuss foundational values. This was a rich time, with deep relationships formed. Meanwhile, small group leaders were being trained hands-on during the Newkirk’s life group weekly gatherings. Four Life Groups were launched in July, with each group having two trained leaders, ready to branch as the groups grow. Ministry teams were organized to prepare for the preview services. Today the launch team stands ready, trained, and excited for the grand opening on September 20, 2015! – Source

The church says the following people have leadership roles at the church: 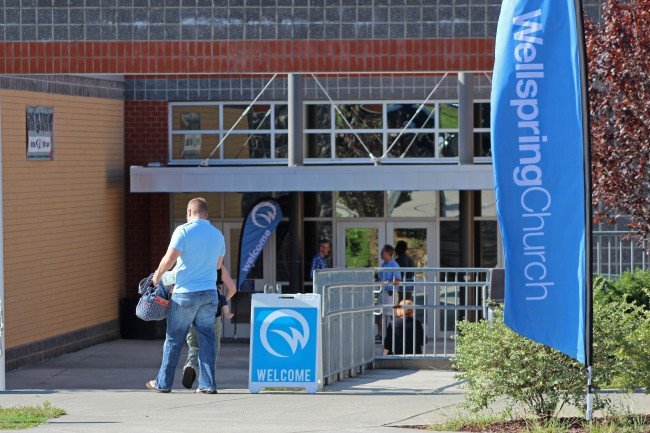 So if you are interested in attending, drop by Heritage High this Sunday at 10am.

By the way, the website does not seem to make any statement about how inclusive they are. Hopefully they are open to all people regardless of religious or sexual orientation. I’m hopeful that they are since they do say to “Love Selflessly, Love God, Love Others.”

Man, I would love to be a fly on the wall of some of the other local churches as Wellspring opens. Apparently you can never have enough churches.

I can see it all unfold now, “We challenge you to a church rumble.” Then the elders get together to work out the details.