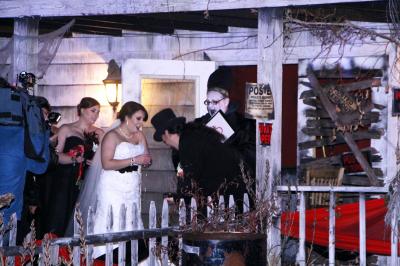 LITCHFIELD, N.H. — The bridesmaids wore black and the flower girl showed up in a skeleton costume at a wedding held at a haunted theme park in New Hampshire.

Melissa Cote and Tom Cowern, who both work at SpookyWorld/Nightmare New England in Litchfield, tied the knot Monday night in front of the attraction’s haunted house.

Cote wore a traditional white wedding gown with a black sash, but her dad dressed as Beetlejuice, the spirit played by Michael Keaton in the 1988 movie of the same name.

Cowern, dressed in black with a top hat, was the first horror actor hired at the attraction eight years ago.

During the ceremony, the justice of the peace encouraged them to “haunt and howl at the moon together as long as you shall live,” and “to have and to hold from this night on, in madness and in haunting fun.”

The couple told WMUR-TV (http://bit.ly/1LUFTZp) Cowern first scared Cote when she went through the haunt. A few months later, they met under normal circumstances.