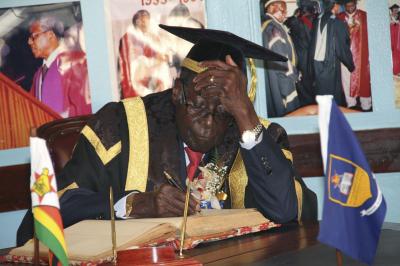 HARARE, Zimbabwe — For Zimbabwean leader Robert Mugabe, one size does not fit all.

A senior staffer at the University of Zimbabwe has been suspended for allegedly procuring academic caps for Mugabe that were too small for his head, according to court papers filed this week.

The longtime leader ended up wearing a mortarboard that was rejected as too small last year while officiating at an Oct. 2 graduation ceremony in his role as chancellor of Zimbabwe’s dozen-plus state universities, the papers said.

Ngaatendwe Takawira, an assistant registrar at the University of Zimbabwe, has approached the labor court to try to stop disciplinary hearings against her over the cap mishap.

The university alleges that the graduation ceremony had to be delayed by 45 minutes while authorities scrounged around for a cap that fit Mugabe.

Takawira, however, has argued that, after efforts to get a replacement failed, the 91-year-old leader wore a cap that was just the right size.

“It fit the Chancellor perfectly well,” Takawira said in the papers, which were filed by her lawyer, Thabani Mpofu.

“The cap sizes were obtained from the Chancellor’s office and also, when he was asked to fit the caps, his office indicated that he was busy,” she said.

Takawira, who said she has been in charge of the university’s graduation ceremonies since 1996, wants the labor court to stop what she calls “biased” disciplinary hearings against her and allow an independent committee to conduct the proceedings.

The university has said there is no evidence of bias on the disciplinary committee handling Takawira’s case.