The Morgan Drexen Legacy – More Pain for Lawyers and Consumers

Morgan Drexen was a nationwide debt settlement enterprise that sold consumers hope they could eliminate their debt by settling it. And while debt can certainly be settled by knowledgeable people, the Consumer Financial Protection Bureau (CFPB) had significant concerns about the company and attorney network they created. The entire Morgan Drexen debacle is a story too long for this article. But you can read all my past stories on them, here.

One of the allegations leveled at Morgan Drexen was they were not acting in the best interests of the consumers they sold services to and were hired to help. Ultimately the CFPB prevailed in their lawsuit, primarily because the court ruled Morgan Drexen had “manipulated, altered, and destroyed evidence.” The court shutdown Morgan Drexen and then consumers were to get refunds from money now controlled by the bankruptcy court. Or at least that was the plan.

Instead, Howard Law, Vincent Howard, Lawrence Williamson, and Williamson & Howard, a law firm, and others tried to make the assertion that while the court had shutdown Morgan Drexen and prohibited any more money to be collected from harmed consumers, they had a separate relationship with consumers and could continue the advance fee debt settlement business model.

Just recently, the attorneys threw in the towel and now say they will get out of the debt settlement business but they don’t have enough money to refund consumers for the money they collected and paid out. Here is the latest article on that new event. The CFPB says they need to refund $ 6 million to consumers and $ 4.3 million paid to creditors. The amount to be refunded is disputed by the law firms and attorneys. Regardless, the firms say they only have “between $ 50,000 and $ 90,000” available.

It appears the reason so many attorneys were drawn into the Morgan Drexen business model was because they perceived they could collect fees from consumers even though the 2010 FTC Telemarketing Sales Rules generally prohibited it. As the complaint says, “This scheme took advantage of provisions found in many state laws that exempted attorneys practicing law from the regulations imposed on debt settlement companies, credit counselors, and credit repair organizations. This allowed Morgan Drexen, through its association with Network Attorneys, to collect large up-front fees for their alleged debt settlement services. Such fees would have otherwise been illegal under many state laws, including under the laws of the Commonwealth of Virginia, either because they were being collected prior to provision of services or because of the amounts of the fees.”

Whew. Now that I’ve brought you generally up to speed, out pops a new lawsuit born out of the Morgan Drexen mess. This time though, what makes this interesting, is the suit goes after the underlying attorneys who claimed they operated separate from Morgan Drexen.

The suit was filed at the end of October in Virginia against Vincent Howard, Lawrence Williamson, James Bowman, The Law Office of James E. Dowman, FerrisBowman, Williamson & Howard, and Howard Law.

The complaint alleges, “The Defendants were all part of a common fraudulent scheme to deceive [Mary] and thousands of other similarly vulnerable people into believing that they were hiring lawyers to represent their interests in negotiations with creditors and potentially in bankruptcy. In reality, those lawyers did not provide legal services to [Mary] or to anyone else. Instead, they deliberately acted against [Mary’s] interests — and against the interests of their other putative “clients” — to enrich themselves and a company based in Costa Mesa, California, called Morgan Drexen.”

But here is where this suit gets interesting, for me. It drags in the local attorney in Virginia who participated with Morgan Drexen. I’m wondering if this is now a strategy that might be used in the other 49 states as well.

As the suit says, “The Defendants’ scheme operated through partnerships based in California, Kansas, and Virginia. Defendants Lawrence Williamson and Vincent Howard and the California and Kansas law partnerships through which they operated (collectively, the “Engagement Attorneys”) recruited a national network of attorneys, including Defendant Bowman. The Engagement Attorneys contracted with attorneys (“Local Attorneys”) in jurisdictions, including Virginia, where they were not licensed to practice law. The Local Attorneys, including Defendant Bowman, were paid by Morgan Drexen to pretend to represent “clients” solicited through telemarketing by Morgan Drexen in the jurisdictions in which the Local Attorneys were licensed (collectively, the Local Attorneys and the Engagement Attorneys are referred to herein as the “Network Attorneys”). As set forth in detail in this Complaint, the courts and regulatory agencies that have had occasion to scrutinize the Defendants’ enterprise have with near unanimity found that the Network Attorneys performed no meaningful work on behalf of their putative “clients,” such as [Mary].”

By enrolling Mary, a 84-year-old widow on food stamps and about $ 900 a month of Social Security income only who was struggling to pay for food and medication, the suit claims “The effect of the scheme was to divert approximately twenty percent of [Mary’s] Social Security income into her account with Morgan Drexen.

But the kicker here is the Morgan Drexen sales people never informed Mary “her Social Security income was exempt from collection. Nor did they ask her whether she in fact owed the debts that were claimed by her creditors.”

The lawsuit states, “Defendant Bowman repeatedly called [Mary] to persuade her to try to increase her monthly payments to Defendants, even though she sometimes did not have enough money left over at the end of the month to afford her heart medication.” – Source

This lawsuit is also notable because it discloses material from the training manuals used by the sales people to sell the program to consumers. The documentation states sales people, “intake specialists”, told consumers, “In response to questions about whether the services will affect the consumer’s credit, the script suggests the following response: “Yes, it may adversely affect it, but you will have a chance to reestablish your credit once you complete the program. In addition, the only way to get out of debt is to not acquire any more.” The Training Manual also states: “Once these debts are settled, your attorney will have your creditor issue a letter, showing the account has been paid off ! The best thing is even the credit bureaus get a copy of this too. It shows that you did the right thing and amended your relationship with the creditor.”

That’s all well and good but it certainly misleads consumers into thinking participating would not have an adverse impact on their credit. While a portion of their settled debt would show paid, the amount of debt forgiven would appear as a bad debt and may even be taxable by the IRS.

In addition, Mary received solicitation letters selling her the services of both Morgan Drexen and local Virginia attorneys. The exhibits in the case provide a sample. – Source 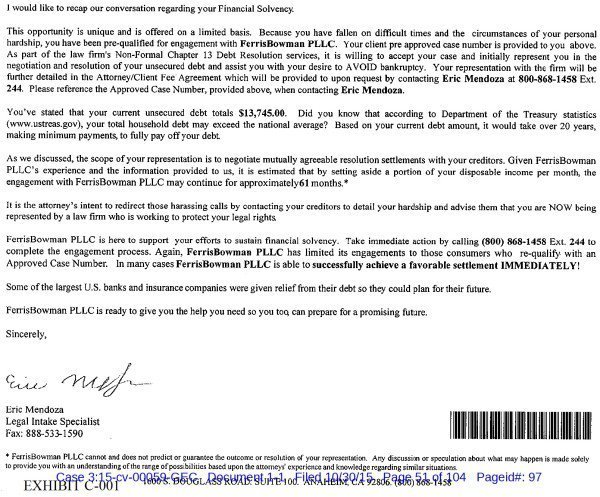 In this case, our 84-year-old widow on food stamps and a meager Social Security income wound up paying and losing a lot of money. The complaint states, “Between 2011 and 2014, [Mary] paid Defendants $ 8,525.00. Of all the money she paid, $ 6,119 was collected as fees from which the Defendants profited, including over $ 1,000 for unnecessary bankruptcy-related services that the Defendants never provided. Only $ 2,504 was ever paid to [Mary’s] six creditors, two of which had sued her.”

Mary’s attorneys state, “[Mary] has a serious heart condition and has suffered two heart attacks. Her doctors have advised her that prolonged stress is harmful to her condition. During the nearly four years she paid Morgan Drexen and the Network Attorneys, [Mary] lived under austere conditions in which she could not always afford her medications or adequate nutrition, worried about her unresolved debts, was traumatized by being sued twice, and experienced deep distress about her financial condition overall.”

I bet this will be an interesting case to watch.

Oh, and in the interest of full disclosure, Howard Law and Vincent Howard previously threatened to sue me over past articles which I believe were all proven to be true by the court documents in the CFPB versus Morgan Drexen case. Howard Law claims they are “a well-respected law firm in the Orange County area.”

But I’m human, so if anyone spots anything in this article that could possibly be incorrect, report it to me here and I’ll research the claim immediately.

If you’d like to stay posted on all the latest get out of debt news and scam alerts, subscribe to my free newsletter.