UNC Public Safety Chief: Lockdown was not an overreaction 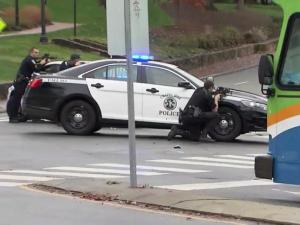 Chapel Hill, N.C. — Law enforcement officials from five agencies descended on the University of North Carolina at Chapel Hill Wednesday morning to investigate a report of an armed person walking on campus.

Authorities found no such person in nearly 30 minutes of searching, but the response prompted a campus lockdown that included sirens warning students, staff and faculty to shelter in place.

UNC Department of Public Safety Chief Jeff McCracken said the initial call to police originated on campus at about 8:22 a.m.

“A call was received stating that an individual armed with a rifle was seen entering our Naval ROTC building,” McCracken said in a 10:30 a.m. news conference.

In the 911 call, a woman can be heard saying that she saw two women wearing military uniforms running “really fast” out of a building and saying there was an armed man inside. The caller states that those women asked her to call police.

“I saw two women run out of the ROTC armory building and they told me to call 911 because there’s a man with a rifle,” said the caller.

Officials from the North Carolina State Highway Patrol, Orange County Sheriff’s Office, Chapel Hill Police Department, Carrboro Police Department and UNC Department of Public Safety all responded to the area, near the intersection of South and McCauley streets, cleared the ROTC building and were unable to locate any armed individuals.

“At this time, there is no apparent threat to the campus,” McCracken said.

The alert to students went out about 20 minutes after the initial call. Catherine Wellen was in her dorm room a block away when the alert went out.

“I had friends calling me, telling me they were crying because they had roommates walking around and everyone was worried because we thought there was a gunman on campus who could be aggressive,” said Wellen.

McCracken said officials are now working to contact and follow-up with the caller to learn more about what may have prompted the call.

Considering recent terror attacks in Paris and Wednesday’s shooting incident in San Bernardino , McCracken said he wouldn’t consider the response to Wednesday’s call an overreaction. He said that high profile cases, including cases of terrorism, played a role in the university’s response.

“I don’t think, given the circumstances that have occurred across the country, it would be considered an overreaction,” said McCracken.

McCracken stressed that even if it turns out to be nothing, nobody should ever hesitate to call if they see something suspicious.

“We absolutely want anybody who sees anything they deem suspicious to call us so we can investigate,” he said. “We don’t have any way of knowing exactly what we’re dealing with until we begin to investigate.”

“I think that any time there is any kind of warning that there’s any students in danger, that the police should take any kind of precaution to keep people safe, because that should be the biggest priority,” said Wellen.

After the all-clear signal was given and UNC resumed normal activities, authorities received another call about a person using a gun at a home near campus.

McCracken said it involved a homeowner who was using an air rifle on his property. Authorities investigated the call and determined there was no connection.

,Law enforcement officials from five agencies descended on the University of North Carolina at Chapel Hill Wednesday morning to investigate a report of an armed person walking on campus.