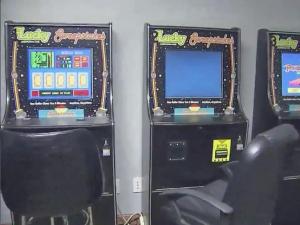 Cumberland County, N.C. — The Cumberland County Sheriff’s Office spent a majority of Thursday morning shutting down a number of illegal video gambling establishments throughout the county.

One establishment on Hope Mills Road was not far from Sherwood Park Elementary School and a day care center. Investigators said the suspect in that case was running a gambling operation inside a fake nail distribution business. Inside, several rooms were set up with video gambling machines.

According to the sheriff’s office, the operation was netting about $70,000 a month.

Sheriff Earl “Moose” Butler started his push to shut down illegal gambling operations 10 years ago. He believes his deputies have made a major dent in illegal gambling in Cumberland County, but he’s still amazed by the staggering amount of money passing through the operations.

“That’s the main issue, that we’re dealing with families spending a lot of their money on gambling, which is their choice, but it’s against the law to do it the way it’s going on,” said Butler. “We’re going to continue to investigate these operations as long as I’m the sheriff of Cumberland County.”

As of Thursday afternoon, four people had been arrested and were being processed at the Cumberland County Detention Center. By the end of the day, authorities hoped to make 15 arrests.

,The Cumberland County Sheriff’s Office spent a majority of Thursday morning shutting down a number of illegal video gambling establishments throughout the county.