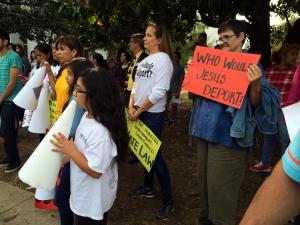 Raleigh, N.C. — People who were arrested last month during a protest against a state law they say unfairly targets the immigrant community on Thursday blasted a federal program that allows local law enforcement to check the immigration status of people who have been arrested.

As part of an Oct. 29 mass demonstration against the law that prohibits any North Carolina county or municipality from restricting local law enforcement’s ability to cooperate with federal immigration officials, six people chained themselves together and blocked traffic on Blount Street in front of the Executive Mansion for three hours.

Each made an initial court appearance Thursday morning, and Gonzalez said no one regrets the act of civil disobedience.

“I think there is a lesson for the community in understanding the issues that are at stake here, which is the dignity and the human rights of immigrants in this country,” she said.

House Bill 318, dubbed the Protect North Carolina Workers Act, also requires state and local government agencies to use the E-Verify system to check the legal status of job applicants and contractors, bars government agencies or law enforcement from using consular or embassy documents to verify someone’s identity or residence and limits food assistance for able-bodied, childless adults who are unemployed.

Rodriguez, an undocumented mother of three, brought her young daughter to the courtroom with her, saying she wants to be an example for her children by standing up for her beliefs.

After the brief court appearance, the protesters and other immigration advocates attended a public forum on the federal 287(g) program, which gives local law enforcement officers, such as Wake County deputies, access to federal immigration databases so they can assist U.S.Immigration and Customs Enforcement agents in detaining those in the United States illegally.

“Without a doubt, (it’s) the single most effective program we’ve ever had, and we’ve taken out a lot of dangerous people,” ICE agent Robert Alfieri said.

During the presentation, the protesters tore off their tops to reveal T-shirts with the slogan “Stop the Hate,” began chanting “ICE out of North Carolina” and marched out.

“I think its overwhelming clear that 287(g) is instilling fear in the immigrant community,” said Tim Eakins, an advocate for immigrant rights. “It is terrifying and separating families here in Raleigh.”

,People who were arrested last month during a protest against a state law they say unfairly targets the immigrant community on Thursday blasted a federal program that allows local law enforcement to check the immigration status of people who have been arrested.

Litigation Practice Group Tells Me to Cancel With Worden & Associates