Raleigh streetlights get a brighter look 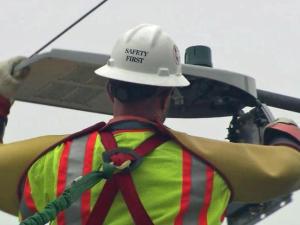 Raleigh, N.C. — The streets of Raleigh are getting a brighter look as the city replaces tens of thousands of streetlights with LED bulbs.

The familiar amber glow of old-fashioned incandescent lights is on its way, replaced the brighter and more long-lasting LEDs.

Jed Niffenegger, transportation operations director for the City of Raleigh, said the lights have been tested over the past few years and have been well-received.

“We didn’t receive any negative feedback, all positive,” he said.

The falling price of LEDs makes them less expensive than the old-fashioned lights. Once crews are replacing all 32,000 streetlights around Raleigh, city taxpayers will save about $400,000 per year.

“Everybody wanted go that way because of the light quality and the reduced energy consumption,” Niffenegger said. “Now that the costs have come down, it’s a no-brainer.

“There’s less maintenance, they last a lot longer, there’s really no downside with them,” he said.

The difference is visible.While the old-fashioned lamps throw dim light over a wide area., the LEDs provide a focused, cleaner beam of light, which should make driving in the dark easier.

Streetlights in Raleigh belong to Duke Energy, which leases them to the city. The bulb replacement project should be complete by the end of 2016.

,The streets of Raleigh are getting a brighter look as the city replaces tens of thousands of streetlights with LED bulbs.