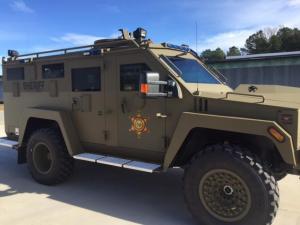 Deputies from the Johnston County Sheriff’s Office said they routinely train for active shooter situations, but without the proper resources, the training is no good.

“The steel is specifically designed to withstand a 50-calliber round,” Bizzell said.

The Bearcat was purchased earlier this year with $275,000 in seized drug money collected over a five-year period.

According to Bizzell, the vehicle has small doors that officers can shoot out of and room to carry victims.

“There is also a battering ram that goes on the front of the truck, and it’s hydraulic,” he said. “It’s a blanket of security for the tactical guys that are going out to provide security, or be the peacekeepers if you will.”

Johnston County’s Bearcat is very similar to vehicles used by officers in the wake of the shooting in California.

“This (shooting) was quietly planned and kept between the two suspects. It not shared via social media – not shared via family or friends, so it is kind of hard to defeat something like that,” Sweeney said, referencing Wednesday’s attack.

Bizzell said his team recently chose to upgrade from shotguns to AR-15 rifles.

“It is the society we live in,” he said. “We can stay up with the times, or we can be left behind, and we are not going to be left behind.”

The Bearcat has been used three times, including during a standoff between a suspect and police Saturday in Four Oaks, Bizzell said.

,Following Wednesday’s mass shooting in San Bernardino, Calif., that left 14 people dead and 21 injured, law enforcement officers in North Carolina were once again assessing their readiness for a similar attack.