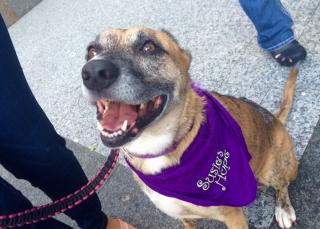 Raleigh, N.C. — The Cary man charged with cruelty to animals for stabbing his husky last spring who became the target of the ‘Justice for Koda’ protest, entered an Alford plea in the case Friday. That means he has pleaded guilty without admitting guilt.

The judge has to accept the plea before Douglas Joseph Hagler will know his punishment.

Hagler was indicted in June after authorities say he repeatedly stabbed his Siberian Husky with a three-foot sword.

Many of those who joined in a protest movement to demand Hagler’s punishment were present in the courtroom Friday. Several were visibly crying as the court played the audio of the call to 911 from one of Hagler’s neighbors.

,Animal activists, angered by the stabbing death of a dog named Koda last month in Cary, gathered both inside and outside the Wake County Courthouse Monday with dogs, bowls and treats to lobby for the punishment of the suspect.