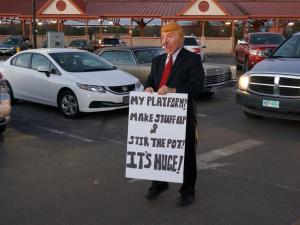 By Mark Binker and Laura Leslie

Raleigh, N.C. — Even if Donald Trump is not exactly your typical presidential candidate, the scene outside Dorton Arena waiting for him to speak Friday had all the hallmarks of a political crowd, including chanting supporters and vendors selling campaign swag.

“I wanted to see him in person,” said Rodney Uriarte, 20, who came with his brother and other family members from the Charlotte area to see the Republican front-runner. “He makes me feel energized.”

Uriarte, a community college student studying civil engineering, said he hoped to hear Trump speak about foreign policy. The self-described Trump fan held a homemade sign that featured a black-and-white picture of the candidate and the slogan, “We shall over comb,” a reference to Trump’s famously buoyant hair.

Trump has come in for criticism for his positions on any number of issues, including immigration. Critics say he is too harsh in his calls to deport all who are in the United States illegally.

But Uriarte, whose family is from Nicaragua, said that he agrees with Trump on immigration policy. His family, he notes, came here as refugees in the 1980s and went through a legal process to stay.

“My Dad was the one to point Trump out to me,” Uriarte said, adding that, if his family could come here the right way, others could as well.

Trump supporters who lined up in the afternoon came from across North Carolina and out-of-state locales such as Atlanta.

Rosanne Sinatra took the day off so she could be first in line. She said she’s a huge Trump fan but had never seen him in person before.

“I like the energy that he stirs. I feel like he’s tapped into the American consciousness of ‘We the people,'” Sinatra said. “I really believe that, and I know that he’s reignited the fire in my belly to be American and to make America great again.”

Paulette del Casale drove to Raleigh from Atlanta for her eighth Trump rally. She said he’s the first candidate about whom she’s ever been excited.

“I’ve heard the same speeches over and over for the last 25 years I’ve been voting,” she said. “I hear the same old, same old, and nothing ever gets done.”

Phil Flinchum agrees, although he said that sometime Trump is a little over the top for him.

“He tells it like it is. He’s not politically correct. He kind of goes overboard sometimes more than I like to do, but you know, I still think we need a fresh face in D.C.,” Flinchum said.

“I like him because he tells it like it is. I’m tired of this politically correct, candy-coating of things,” said Bragg, who describes herself as “very conservative.”

Sporting a newly purchased “Trump 2016” button, she said she saw the country as being on the wrong track and that things have not gone well for her in the past eight years. Before having children, she said, she had never been involved in politics. Friday’s Trump rally was the first time she had turned out to a campaign event.

Asked what she hoped to hear, Bragg said she’d like to hear Trump take on term limits for lawmakers.

Not everyone at the State Fairgrounds was a die-hard fan.

Hayley Driggers and Kathryn Mulqueen are classmates at the University of North Carolina at Wilmington who will be voting for the first time in 2016. They drove to Raleigh just for the chance to see Trump.

Driggers said she isn’t sure yet who she will support for president, while Mulqueen is a Bernie Sanders supporter who wants to see the other side.

“I’ve seen a lot about Trump. My dad plays him every once in a while,” Mulqueen said. “I’ve heard stuff about him. My grandparents love him. It’ll be fun.”

One man who approached reporters outside the arena to ask what was going on was told that it was a Trump campaign rally.

“Oh, no thank you,” he said, before driving away.

But by and large, the growing crowd was happy and upbeat as they waited to be admitted to the arena.

“America’s Trump Card. Donald for President,” read Lee Churchill’s homemade sign that she hung around her neck as she browsed the various T-shirt and hat vendors.

“I admire him because he stands up for America,” said Churchill, who said she’s worked for other Republican candidates in the past.

Like Uriarte, Churchill said she appreciates Trump’s stance on immigration. Too often, she said, people who come here illegally are a toll on services and take jobs from others.

“It takes a lot of opportunities from those who need jobs,” she said.

As well, Churchill said she believes Trump would be tough on foreign enemies.

“He’s going to stop coddling those terrorists,” she said.

,Even if Donald Trump is not exactly your typical presidential candidate, the scene outside Dorton Arena waiting for him to speak Friday had all the hallmarks of a political crowd, including chanting supporters and vendors selling campaign swag.