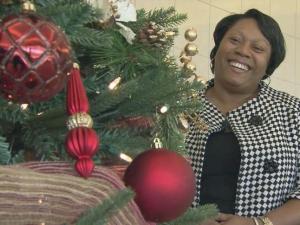 Raleigh, N.C. — The White House is aglow with the vivid colors of the holiday season and a Raleigh woman was among the decorators from 35 states who helped create the holiday display.

Carnella Renee Hill knows how to bring the holiday spirit. She’ll be home for Christmas, but had to miss Thanksgiving after being summoned to the White House.

“I called my mom and said ‘OK, I’m not coming home for Thanksgiving,’ and I said you’re going to have to hold the turkey for me,” said Hill.

Hill and about 100 other people who decorate for a living came from across the country to get 1600 Pennsylvania Avenue ready for Christmas. Decorators often worked for more than ten hours per day during the week they were at the White House, but Hill said that everybody was excited despite the long hours.

“When you do something like that and you know it’s going to make a difference [for] the kids that are coming to the White House and the visitors, you can’t help but be excited,” said Hill.

Hill has her own business- Interiors by Renee- and already decorates the four Christmas trees at her church, so it wasn’t a surprise that she had presidential aspirations.

Hill had to start thinking about Christmas in July, when the application process started. She was thoroughly vetted, having to provide samples of her work and undergo an background check, and then thoroughly overjoyed.

“To just decorate this large place that makes a difference in all of our lives, it was just awesome,” said Hill.

The East Room and the State Dining Room now have her pretty touch. She also had a secret mission while at the White House.

“I’m not supposed to talk about that, but I had an opportunity to do a special office,” said Hill. “They said ‘we’ve got a secret mission for you and we’re going to pull you off to the side and we have a short time to get…it completed.”

She never met the man who works in that office, but she did shake hands with his wife.

“Just to see the First Lady’s face at the reception was awesome,” said Hill.

Hill was one of two decorators from North Carolina. The other was from Jacksonville.

,The White House is aglow with the vivid colors of the holiday season and a Raleigh woman was among the decorators from 35 states who helped create the holiday display.