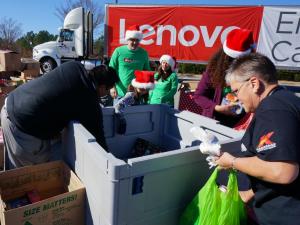 Morrisville, N.C. — A group in the Triangle is attempting to shatter a world record by collecting a historic amount of toys this weekend for children of North Carolina military families.

Lenovo’s parking lot in Morrisville was transformed into a Toyland Saturday as the U.S. Veterans Corps joined forces with the tech company to collect new toys for the “Toys for Lil’ Troops” drive.

Philip Robertson of Guinness World Records was in attendance Saturday to observe if the group did break any world records. The current world record is 45,600 pounds, according to Robertson.

“Each toy has to be a toy. Unfortunately books and bikes don’t qualify,” Robertson said. “Neither does chocolate, and we’ve seen quite a bit of toothpaste, which you have to disqualify.”

Kimberly Kaighn drove with her daughter, Nolynn, from Elizabeth City to stuff their car with toys.

“I just saw this on Facebook, and it touched me,” Kaighn said. “So I started to help.”

Kaighn said she will deliver the toys to the families of the U.S. Coast Guard station.

“The parents are protecting our freedoms,” she said. “They put their lives on the line every day for us. I mean, the least we can do is help their families and let their children have a Christmas.”

“At the end of the day, I think this is what America does best—they come out and they come together,” said Scott Ottman with Lenovo.

,A group in the Triangle is attempting to shatter a world record by collecting a historic amount of toys this weekend for military children in North Carolina.