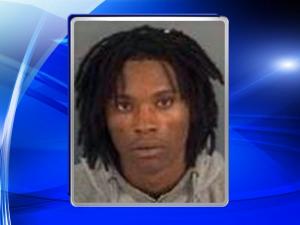 Fayetteville, N.C. — Fayetteville police arrested two men Saturday in connection with a robbery in the 900 block of Odom Drive that occurred around 11:45 a.m. on Friday.

Authorities said one suspect fired shots at witnesses, who alerted police to the scene, and then fled into a nearby tree line.

Both suspects were taken into custody in the 540 block of Alleghany Avenue on Saturday after leading police on a foot chase across the baseball field at Douglas Byrd High School and into an adjacent neighborhood.

Authorities obtained warrants and charged the shooter, Darren Stephon Belton, 18, of the 810 block of Juniper Drive, with two counts of attempted first-degree murder, two counts of assault with a deadly weapon with attempt to kill, felony attempted breaking and entering, conspiracy to commit breaking an and entering, injury to real property, possession of stolen firearm, and possession of weapon on school grounds.

Belton also had two outstanding warrants for his arrest from a breaking and entering that occurred on Oct. 31, 2015. He was being held Saturday at the Cumberland County Jail under a $141,500 secured bond.

Purcell was being held at the Cumberland County Detention Center under a $5,000 secured bond.

Authorities said the investigation is ongoing. No further information has been released.

,​Fayetteville police arrested two men Saturday in connection with a robbery in the 900 block of Odom Drive that occurred around 11:45 a.m. on Friday.