Motorcyclist killed in Wake County chase, crash was a paratrooper 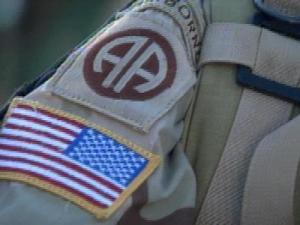 Wake County, N.C. — The motorcyclist who died Saturday after a high-speed chase through southwestern Wake County was a paratrooper with the 82nd Airborne, a Fort Bragg spokesman said Monday.

According to the Wake County Sheriff’s Office, deputies tried to pull Smith over Saturday just before noon after spotting him speeding and driving recklessly on N.C. Highway 55 near Fuquay-Varina. Smith sped away north on U.S. Highway 401, reaching speeds of 145 mph.

Officials said he approached Old Stage Road at about 100 mph, crossed the center line and struck a 2008 Chevy Silverado stopped at the intersection of Legends and Old Stage roads.

The people in the truck were not hurt. Smith died at the scene. He is survived by his mother, father, and stepmother.

“Pfc. Smith was a fine paratrooper whose service and friendship will be sorely missed,” said Lt. Col. Patrick Sullivan, commander of 307th BEB. “Although his life and Army career are no more, I know his teammates in this battalion and throughout the airborne community will keep Pfc. Smith’s spirit alive. He is forever in our hearts, and our most sincere condolences go out to his family and friends during this time of grief.”

,The motorcyclist who died Saturday after a high-speed chase through southwestern Wake County was a paratrooper with the 82nd Airborne, a Fort Bragg spokesman said Monday.