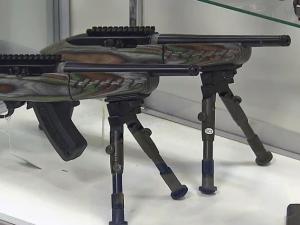 Clay Ausley, the owner of Fuquay Gun & Gold, said shoppers are not just checking items off their Christmas lists, they are stocking up in anticipation that gun control laws will tighten.

“We even saw an influx of customers coming in purchasing in fear of what (Obama) was going to say,” he said.

Ausley said he started work at 4 a.m. Monday morning to replenish the stock.

“With Obama making the statement that he wants to change legislation, get it to where its harder for the public to purchase high-capacity firearms, folks are going to start running to get what they can get ,” he said. “The heaviest hitters have been ammunition and high-capacity magazines. The AR mags, the AK mags – they have been flowing out of here like water.”

Gun owner Rebecca Eaddy says she is concerned about her legal rights.

“It is a concern because those of us who take our Second Amendment rights seriously do not want them to be infringed,” Eaddy said. “We take that very seriously.”

“We have added a bunch of class dates and scheduled a lot more classes, and it is still not enough to keep up with the demand we have going right now,” he said.

“I don’t recommend anybody just to go out and purchase a gun and go home and think, ‘I’m safe.’ A gun is a last resort,” LaFree said. “It is a means of protecting my life when my life is in full danger of death or my family.”

But in the wake of Wednesday’s shooting in San Bernardino, gun owners said self-protection, not legislation, is on their minds.

“Criminals are going to commit these egregious acts whether there are laws in place or not,” Eaddy said.

“People who are committing crimes are getting stuff illegally no matter what,” LaFree said. “It’s not the legal gun owners that are coming in and buying them.”

According to the Wake County Sheriff’s Office, there were about 170 more pistol purchase permits issued in November 2015 than in November 2014. Ausley does not anticipate the sales will slow down anytime before the 2016 presidential election.

“Some of the folks who are running for office absolutely want to get their hands on our guns, for sure, and restrict our gun rights,” he said.

The group North Carolinians Against Gun Violence said it believes stronger laws could help curb violence and that universal background checks should be required.