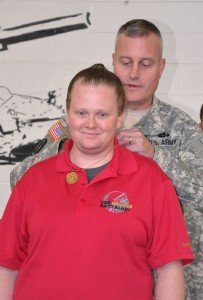 The Award is presented to a lady who has established capability of achieving results above and beyond the call of duty in support of her spouse. The award of the Molly Pitcher medal is a significant award usually presented on the feast day of the patron saint of Artillery; Saint Barbara.

The Molly Pitcher Medal was presented to Amanda Jones by Lieutenant Colonel John Ebbighauser, Commander of the 5th Battalion 113th Field Artillery Regiment. The Battalion Commander who stated during the presentation;

“I have never heard of a spouse doing as much for the unit as this lady has over the past 4 years. Her relentless support for her husband, while he was deployed to the Middle East was overwhelming in that she assembled and posted monthly care packages for every member of the battalion. In addition she has continued to provide for the men, women, and families of unit members ever since their return from duty.

The results of her endeavors also go toward the Wounded Warrior and USO at RDU airport. This medal although small in comparison confirms your actions throughout the period as a person whose resourcefulness has contributed in a significant way to the unit’s readiness and performance of duty.”

American Express Cancelled My Account and it is Not Fair

Is Coast Processing or Litigation Practice Group a Scam?

Veterans United Overcharged the VA and I Want My Eligibility Back

Can My American Debts Be Collected In England?

If You Send Checks to Pay Bills – READ THIS NOW