Fall wraps up wet and warm 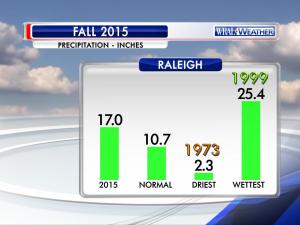 We’re almost two weeks away from the traditional start of winter, marked by the occurrence of the winter solstice, but in a meteorological/climatological sense, we finished off the fall at the end of November.

It proved to be a fairly warm and very wet season for most of us, although not quite to record levels.

As seen in the first graphic, our average temperature for Raleigh during the September to November time span worked out to 63.1 degrees, almost 2 degrees above normal but significantly cooler than the fall of 1931.

We were closer to the top of that 128-year list when it came to fall precipitation, with 17 inches recorded at RDU.

That’s more than 6 inches above normal for the season but still well shy of the 25.4-inch total from 1999 (when Dennis and Floyd made their marks). This was our 7th wettest fall season, just shy of the 18.2 inches that fell in 1888.

There are signs that December will likewise wind up, on average, warmer than normal and with somewhat above-normal precipitation. How the rest of “meteorological winter” turns out remains in some question, especially regarding temperature, but the expected strength of El Nino through the upcoming season would seem to portend a good chance of above normal precipitation due to its tendency to lead to rather frequent and fairly intense low pressure areas tracking across the Deep South and Southeast.

Unfortunately, that doesn’t help with projecting the details of those storm tracks, which could result in anything from very little snow and ice for the season to quite a lot.

,We’re almost two weeks away from the traditional start of winter, marked by the occurrence of the winter solstice, but in a meteorological/climatological sense, we finished off the fall at the end of November.