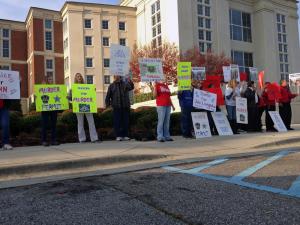 Lillington, N.C. — Family members and friends of a Harnett County man killed last month in an officer-involved shooting want answers about his death, and they rallied Thursday morning at the county courthouse.

John Livingston, 33, was shot and killed on the front porch of his Spring Lake home Nov. 15.

Deputies arrived at Livingston’s Everett Street home at about 3:30 a.m. that day to investigate a reported assault. Witnesses say Livingston told deputies the couple they were looking for didn’t live there, and when deputies asked to search the home, he refused because they didn’t have a search warrant.

Deputies say that’s when Livingston became combative and was shot. A deputy suffered minor injuries in the confrontation.

“He was home minding his business,” Almeria Page said during the rally. “Is it going to be your home next they’re going to kick in? Is it going to be my door? I’ve got kids that are growing up. We’ve got to get justice and make this right.”

“I just feel like, if it’s the case that somebody in law enforcement takes their authority and uses it in the wrong way, they should not be allowed to have that authority,” Penny Setzer said.

​Deputy Nicholas Kehagias has been placed on administrative leave while the North Carolina State Bureau of Investigation reviews the incident, which is standard procedure.

Kehagias has worked with the Harnett County Sheriff’s Office since July 2013 and is assigned to the Patrol Division.

Harnett County Sheriff Larry Rollins has referred all questions to the SBI.

SBI spokeswoman Shannon O’Toole said agents are still waiting for lab results and Livington’s autopsy report, which could take another month, to complete their investigation. At that point, she said, it would be up to District Attorney Vernon Stewart to decide whether any charges will be filed.

,Family members and friends of a Harnett County man killed last month in an officer-involved shooting want answers about his death, and they rallied Thursday morning at the county courthouse.