No penalty for construction company after smog-causing fire 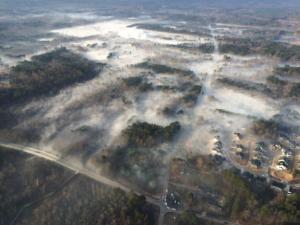 Huegerich explained that Sun Con construction was working along Green Level West Road in a recently annexed part of Apex and had been burning stumps and other debris for days.

Sun Con representatives told Huegerich they thought they were outside city limits and did not need a burn permit. Huegerich said they wouldn’t be penalized but also were informed that any future burn permit would have to come from the Apex Town Council.

The fire, which spread thick, white smoke in an area along Green Level West Road from White Oak Church Road to Wimberly Road and over parts of Roberts, Beaver Dam and Green Level Church roads, held commuters at a standstill and dropped visibility to zero Thursday around 8 a.m.

The source of the fire was so deep in the woods that fire trucks were unable to reach it. Sun Con crews used bulldozers to spread out the burning brush over damp ground in an effort to extinguish it.

“They are trying to turn the piles over and mash them into the ground to alleviate the problem,” Huegerich said.

By 11 a.m., the smoke had dissipated, but the fire was still smoldering late Thursday afternoon.

Barry Knapp, who lives in the area, said the smoke delayed his wife from getting to her job as a teacher in Durham.

“Yesterday it was a little hazy but nothing like it was today,” Knapp said. “You couldn’t see today.”

His wife left the house but did not get far before the lack of visibility forced her to pull over, he said.

“I called her and I said, ‘You’re going to have to wait there a little bit. Just wait for the sun to come up,'” Knapp said.

He eventually walked out to find his wife, navigating the smoky streets with his face covered in a scarf.

“I was standing at the edge of the road and there was a line of cars at the other side but I couldn’t see those cars unless I started walking into the road,” Knapp said.

“I’d rather have been out here in the black dark, no light whatsoever,” he said. “I could have seen more.”

Johnson said as he sat in his motionless car, he was able to hear other vehicles colliding around him.

A damp, foggy morning contributed to the lingering heavy smoke. Huegerich said early fog and humidity kept the smoke concentrated near the ground.

The state Highway Patrol recorded at least six accidents it attributed to the smoke, although no one was injured. Officers escorted some stranded drivers out of the haze at 5 mph.

,The construction company whose land-clearing efforts sparked a fire that blanketed a portion of western Wake County in smoke Thursday morning won’t face any fines or penalties for that action, Apex Fire Marshall Karl Huegerich said.