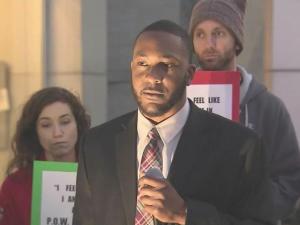 Durham, N.C. — Two Durham County Jail detention officers were recently fired and criminally charged after investigators concluded they used unreasonable force against inmate Genapher Page, throwing her to the ground and punching her in the face.

The fight cost Officer Anita Louise Alston and Officer Rachel L. Smith their jobs. A supervisory review determined the pair “utilized force that appeared to be beyond the amount reasonably necessary to restrain a detainee,” the Durham County Sheriff’s Office said in a statement released Monday.

A group calling themselves The Jail Investigation Team is asking for an independent investigation of conditions at the facility. The group has voiced concerns about sanitation, medical care and the time inmates spend locked in their cells.

There are currently 487 inmates in the detention facility, and many friends and family members say they are treated inhumanely.

The Durham County Sheriff’s Office announced in October that general population detainees would have up to eight hours per day to use the housing unit’s common and recreation areas, which doubled the previous amount of time inmates had been allowed outside their cells.

Umar Muhammad, 28, knows what it feels like to be an inmate looking out a window in the Durham County’s jail. He was charged in 2008 with two counts of misdemeanor drug paraphernalia possession and robbery with a dangerous weapon.

“I have had many trips to the Durham County Jail,” he said.

Muhammad was released from prison in 2012 and now wants to help people in the community who believed in him. The 28-year-old has become a community organizer with the Southern Coalition for Social Justice since his release three years ago.

On Thursday night, Muhammad and other demonstrators protested against the improper treatment of inmates in the jail.

“Not only are these people not convicted, these people are people,” Muhammad said. “You want to treat people as people. Mold on the mattress, days without showering; that’s unacceptable.”

Cynthia Fox’s son, Kadeem Rasheed Johnson, was in the jail for two and a half years and echoed the message about the rough conditions.

“They treat you like you have no rights when you come here at all,” she said. “If you don’t have any outside help then you get no assistance. If you don’t get any outside assistance you go hungry here, you go cold.”

“Upon my request, the agency will conduct a thorough inspection of the detention center and offer recommendations on the best practices early next year,” Andrews said.

Andrews added that a staffing allocation analysis—a review of jail resources—is currently being conducted, and the Durham County Health Department is also examining the nutritional value of meals served.

,Two detention officers were recently fired and criminally charged after investigators concluded they used unreasonable force against inmate Genapher Page, throwing her to the ground and punching her in the face.