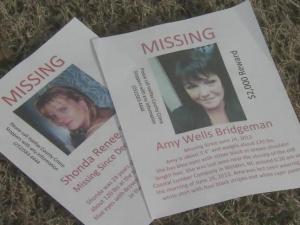 Halifax County, N.C. — Amy Bridgeman is one of three missing women in Halifax County whose disappearance has baffled their families for years.

The 42-year-old disappeared in June of 2013 and was last seen in a yard on Elm Street in Weldon. Residents told police she walked away, left her purse and was never seen again.

Bridgeman’s fears and uncertainty are shared by at least two other families in Halifax County. Jalesa Reynolds, 18, disappeared in February of 2010, and 24-year-old Shonda Stransbury went missing from Roanoke Rapids in December of 2006.

“Our main focus is to bring the missing home, not just one but all three of them,” said search organizer, John Wichard.

If anyone has information about the missing Halifax County women, call the NC Wanted toll free hotline at 1-866-439-2683.

,Amy Bridgeman is one of three missing women in Halifax County whose disappearance has baffled their families for years.