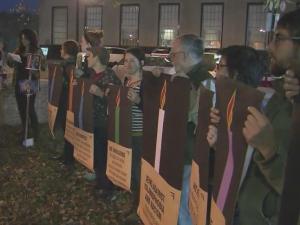 Durham, N.C. — The Jewish community in Durham responded Friday to what they’re calling “Islamophobia” as a result of recent comments about Muslims in America.

A local group is proud to say they stand with those of Islamic faith, so much that they dedicated a night of Chanukah to stand with the Muslim community.

They say their own history of oppression and persecution compels them to speak up for Muslims today.

“As Jewish people, we’ve learned the phrase ‘never again,’” said Beth Bruch, a member of Jewish Voice for Peace. “I feel the same thing needs to apply to anyone who’s oppressed.”

The organization joined a movement of other Jews across the nation to protest against Islamophobia—the dislike or prejudice against Islam or Muslims.

Manzoor Cheema, a member of Muslims for Social Justice, said Islamophobia is also connected to other forms of discrimination.

“Anti-black racism, sexism, homophobia, attacks on women; in that sense, I’m here to also connect our struggle with the broader community,” Cheema said.

The group addressed Gov. Pat McCrory’s request to the federal government to stop sending Syrian refuges to North Carolina until he is satisfied with the vetting process, and presidential hopeful Donald Trump, who recently made comments about barring Muslims from the United States.

“The real danger in the phenomenon of Donald Trump is that he’s making certain things normalized,” Cheema said “He’s making it normal for people to demonize and attack Muslims without any consequences.”

The gathering in Durham was initiated by Jews Against Islamophobia in New York City.

,The Jewish community in Durham responded Friday to what they’re calling “Islamophobia” as a result of recent comments about Muslims in America.