Moss: Dreaming of a White Christmas? Odds are long

It’s a pretty frequent question, as you might imagine. “What are the chances of a White Christmas for the Triangle and surrounding areas?” In a historical sense, the simple answer is our odds are not very good at all, but they are also not zero. As with many simple answers, however, there’s a bit more complexity that’s involved, and a lot of it depends on how you define “White Christmas.”

If any kind of frozen precipitation on Dec. 25 suits your purposes, there have been quite a few occasions that qualify.

There have been a very few situations in which there was previously accumulated snow remaining on the ground for Christmas Day. This occurred in 1930, 1935, 1966 and 1967, with 1966 being the last time at least an inch of snow remained in place at the official observing site. When it comes to measurable (one-tenth of an inch or more) snow on Christmas itself, there was about .4″ of combined sleet and snow measured in 1947, and then .4″ of snow that started during the evening in 2010 and ended with a total of around 7 inches of snow on the Dec. 26.

A couple of climatological agencies have looked into quantifying the probability of a White Christmas. This again requires specifying some definitions. The National Climatic Data Center produced a map of the probability of greater than one inch of snow on the ground on Dec. 25. 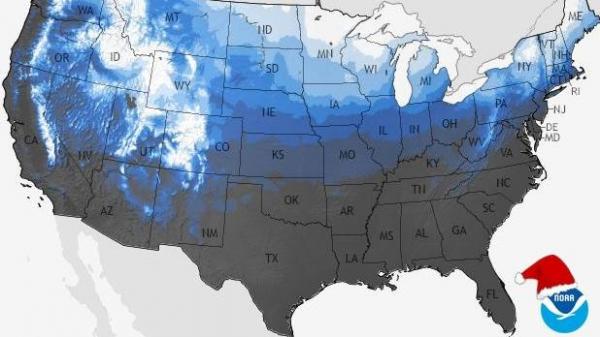 By this definition, our probability in Raleigh worked out to about 2 percent, or twice in a hundred years on average. You might think the chances would increase toward the northwest, due to higher elevation and typically closer to colder air. It does, but only to about 3 percent for Roxboro!

Closer to home, our colleagues at the State Climate Office of North Carolina also looked into the chances of snow at Christmas, but took a less restrictive approach that allowed for any measurable snow that occurred anytime in the December 24-26 range. Adding those two extra days, and not requiring more than an inch of snow to be involved, pushes the probability up to about 5.6 percent for RDU (a little more than once every twenty years), 3.3 percent for a long-running site at NCSU with data back to 1892 and about 5.1 percent for Roxboro. There is a tool on their web site where you can check these numbers for many towns and cities around the state, along with a list of years with measurable snow at that site and a listing of regional winter storm events that included that location.

So, all of that shows that we live in an area with rather poor prospects for a classic, winter wonderland/marshmallow world kind of snow event around Christmas, but each year brings a new opportunity, and we have to take each one as it comes.

As I write this, we’re still a week and a half away from Christmas 2015, so any kind of real specific forecast is highly in doubt and subject to change. At this moment, longer range ensemble forecast projections, both from a North American system that combines output from U.S. and Canadian models and the separate European system, are showing much colder air invading late this week and through the weekend, but then a rebound to much-above-normal temperatures leading up to Christmas. If those prove to be reasonably accurate, our prospects for snow this year are just about nil.

Do stay tuned, however, just in case those projections take a dramatic turn along the way …