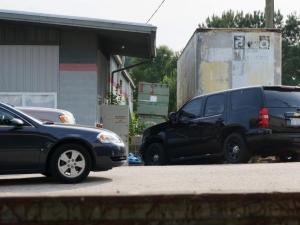 Raleigh, N.C. — Federal authorities have taken over a case in which a woman says she was held in a Zebulon warehouse last year and forced to have sex with her captor.

Robert Edward Whiteside, 46, has been charged with interstate kidnapping and money laundering. He remains in federal custody and is due in court in January.

A 34-year-old woman from Germany sent an email in June 2014 to her estranged husband asking for money, and he became concerned and contacted authorities. Police were able to trace the email to Whiteside, who runs a refurbishing business from a warehouse at 511 Mack-Todd Road.

The woman was with Whiteside when officers showed up at the warehouse, and she told police that she had met Whiteside on a dating website and had traveled from Germany to see him. When she arrived, however, he took all of her money so that she couldn’t leave the country, she said.

A search of the warehouse turned up a passage behind a wall cabinet that led to a bathroom area and another passage that could have been used to hide someone. Investigators haven’t provided details on where the woman was allegedly held.

Whiteside was originally charged with second-degree sex offense, sexual servitude of an adult victim and two counts of assault by strangulation.

,Federal authorities have taken over a case in which a woman says she was held in a Zebulon warehouse last year and forced to have sex with her captor.