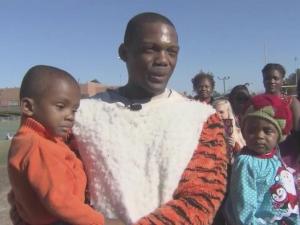 Cumberland County, N.C. — Captain Augustus Turner—a military lawyer who has been serving in Iraq for the past six months—returned home to surprise his family for the holidays.

Turner’s son, Maximus, became an adopted member of the South View High School marching band while he was deployed overseas.

“Probably two months into it he came out and started doing the routine with them,” said Turner’s wife, Michelle. “They kind of inherited him as one of their own.”

The captain surprised Maximus and Michelle—dressed up as the South View Tiger—during a marching band performance.

Turner’s family thought he was still deployed overseas and wouldn’t be home for Christmas.

“For me, this was my first time deploying,” Augustus Turner said. “As scary as it is for us to go into an unknown environment, it’s even harder for family.

Through his deployment, Turner’s wife sent video of Maximus performing with the band. It was a piece of home that touched the captain’s heart.

,Captain Augustus Turner–a military lawyer who has been serving in Iraq for the past six months–returned home to surprise his family for the holidays.