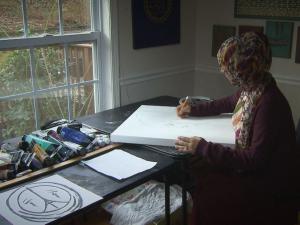 In the Triangle and around the country, Muslims have held vigils for terrorism victims, rallied in denouncing ISIS and started campaigns promoting tolerance and compassion. Yet, the FBI reports hate crimes against Muslims are rising.

When Kulsum Tasnif can’t find the words for what she’s feeling, her emotions pour out on canvas.

In the hours after extremists killed 130 people across Paris, she painted an image of a Muslim woman crying.

“It was just a translation as to what Muslims were feeling,” she said, “which was sadness, which was devastation, a sense of hopelessness.”

With each attack by extremists, Tasnif, a Muslim artist living in Raleigh, feels the ripple effect of distrust and fear.

And she worries about her three children.

“It’s hard speaking to my kids because they’re fairly innocent and I don’t want to scare them,” she said. 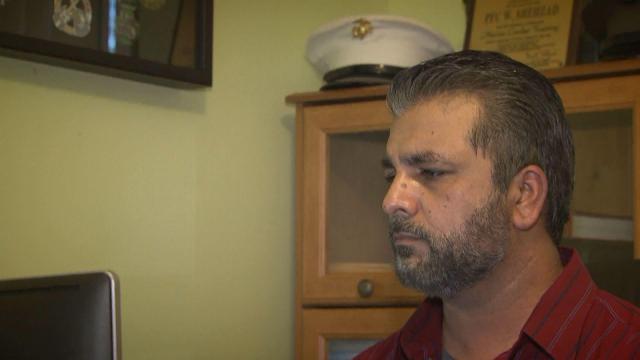 As a former Marine, Waseem Shehzad said the notion that he’s anything but loyal to his country is particularly piercing.

“Actually it breaks my heart,” he said, describing stares and questions which he says have become more bold, in the wake of calls by Donald Trump and evangelist Franklin Graham for a “complete shutdown” of Muslims into the United States.

“People come up and say, ‘Are you Muslim? Yes? Well go back to where you’re from,'” Shehzad said.

As a former Marine, Shehzad said the notion that he’s anything but loyal to his country is particularly piercing.

“It brings out that extreme side, the extreme fringe in the public that want to use this as an excuse to hurt other people, and that’s where the Muslim community is fearful,” he added.

Few have felt that fear quite as personally as Mohammed Abu-Salha. His daughters, 19-year-old Razan and 21-year-old Yusor, were murdered in February, along with Yusor’s husband, Deah Barakat.

“Of all people, we know what it means to have your loved ones killed suddenly for no reason,” he said.

Although police have said Craig Stephen Hicks had an on-going dispute with the three young people over a parking space, Abu-Salha sees it differently.

“We believe beyond any shadow of a doubt it was a hate crime,” he said.

Abu-Salha calls Hicks a terrorist and wonders why others do not.

He works tirelessly to tell the world about his daughters – young, philanthropic Americans.

Still, Abu-Salha sees hope. So does Waseem Shehzad and Kulsum Tasnif. Each has experienced the compassion of their neighbors and their curiousity and genuine interest in the Muslim faith.

Though very different, these three share a common determination to rise above hate and set a living example of peace.

,In the Triangle and around the country, Muslims have held vigils for terrorism victims, rallied in denouncing ISIS and started campaigns promoting tolerance and compassion. Yet, the FBI reports hate crimes against Muslims are rising.