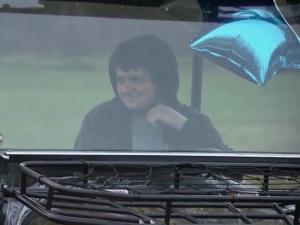 Nash County, N.C. — A Nash County teen received what he calls the greatest gift he’s ever gotten Monday, but he had to go through a struggle to get it.

In March, 17-year-old Jake Wachowicz learned that he had cancer.

“It was the hardest month of my life. It was hard and I broke down and cried a few times, and I kept strong,” said Wachowicz. “2015 has been rough.”

Monday was much happier as he greeted the unexpected camera and crowd gathered at his home. Kristen Johnson with Make-A-Wish of Eastern North Carolina worked with others to bring Wachowicz a rough terrain vehicle to carry him around the outdoors.

“This was his one true wish,” she said.

The gift recalled the kind of things Wachowicz enjoyed before being diagnosed.

Just a few months before Wachowicz found out about his cancer, his uncle was diagnosed and lost his fight earlier this summer.

“He had four tumors in his brain and to see the way he declined gave me something to fight for. He wanted me to make it,” Wachowicz said.

The gift of the rough terrain vehicle came at a time when Wachowicz and his family could really use a surprise.

“You can see it on their faces, you can see the joy in their eyes. They just light up when their wish is granted,” said Johnson.

Recent scans have shown that Wachowicz’s cancer is in remission, but he must still be tested monthly to make sure it does not return.

,A Nash County teen received what he calls the greatest gift he’s ever gotten Monday, but he had to go through a struggle to get it.