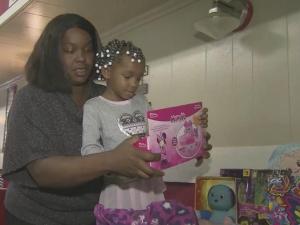 Erwin, N.C. — While many people around the Triangle opened gifts, many others were just thankful for a warm meal. Several organizations in the area made it their mission to provide food and toys for the less fortunate on Christmas.

Sylvia Wiggins remembers not having much as a child and said it’s easy to relate with people she served on Friday.

In addition to food, not a single child was turned away from collecting a toy all day long, Wiggins said.

“I’ve really, really been wanting to make sure children that I come in contact won’t have the same experience that I had,” Wiggins said.

Wiggins said she hopes the toys won’t just put a smile on the kids’ faces for a day, but also shape their futures.

More of the same spirit of giving was found Friday afternoon at Mama J’s Diner in Erwin.

Restaurant manager Tim Johnson, who also coaches the basketball team at Stillwater Christian Academy, was on a mission to make sure everyone had something good to eat on Friday

The diner was scheduled to be closed, but Johnson said helping others was more important.

“We had 80 families in today eating everything from macaroni and cheese, corn, green beans, stuffing, dressing, ham, turkey; you name it,” Johnson said.

Ronnie Jones and his mother had been looking for a place to eat all afternoon before finding the Mama J’s.

“Who would have thought that we’d be able to go into a place that basically is closed,” Jones said. “And he goes out of his way to cook us something. You can’t ask for a better spirit than that.”

The Stillwater Christian Academy basketball team has aspirations of showcasing their athletic talents in college, and hopefully on the professional stage, but on Friday they were focused on stacking toys they collected for children.

“We wanted to see every kid happy and see smiles on their faces,” Johnson said. “We’re just going into communities today. Knock on a door, hand out a toy, just to make sure everybody has a smile on their face.”

,While many people around the Triangle opened gifts, many others were just thankful for a warm meal. Several organizations in the area made it their mission to provide food and toys for the less fortunate on Christmas.