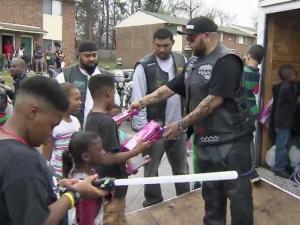 Raleigh, N.C. — When the Turning Point Biker Club thundered into the Raleigh North Apartments along Raleigh Boulevard on Thursday, they brought with them more than leather jackets and bandanas.

As many as 80 bikers roared into the parking lot as wide-eyed children gathered around to see a trailer stuffed with toys.

For the past eight years, the club has given out toys and clothes for children of every age.

“I brought my son with me so he could be a part of it, just to know that people need help,” said Aaron Mastrodonato, a member of the motorcycle club. “It’s the holidays, and it takes people like us to come together and make it happen.”

Many of the children who receive the toys might not get much else for Christmas, including Kesha Williams’ children.

“I thank God that (the club) did because they helped us out with a lot of stuff that we were not able to get,” Williams said.

Local businesses and individual donors gave the gifts, and on Christmas Eve the bikers make their deliveries to four low-income neighborhoods around downtown and Southeast Raleigh.

Children who made it on the honor roll at school received brand new bicycles.

The organizer of the event, Herman Jones, said the event touches him to the core.

,The Turning Point Biker Club gave out a trailer full of toys to children in low-income Raleigh neighborhoods.