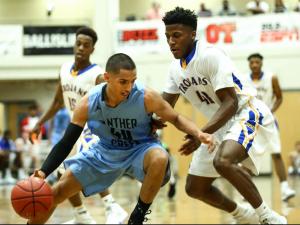 Raleigh, N.C. — Garner High School led every minute of its games versus Panther Creek, and even though the Catamounts hung around early, the Trojans were too much to handle, pulling away late for a 85-63 win.

With the win Garner advances to round two of the David West Bracket in the HSOT Holiday Invitational tournament.

“We had an outstanding second half against a well coached team,” Trojans coach Eddie Gray said. “I thought we were leaving a lot of points out on the court, and the kids responded in the second half. For some reason this team has had good third quarters. I hope they keep it up.”

Garner’s biggest lead in the first half was 11, but the Trojans ballooned the lead to as many as 26 in the second half, led by a big game from forward Alex Reed (20 points, 13 rebounds) and a burst in the third quarter by guard Thomas Allen, who led the way with a game-high 26 points.

“Reed has been a force for us in the middle,” Gray said.

After Panther Creek pulled to within four on a three from Riley Adams, the Trojans went to work. Reed scored four in a row, Andrew Abrom (15 points, 9 rebounds) hit one free throw and Allen hit a deep three to cap a 9-2 run. Catamounts guard Juan Munoz hit a triple to cut the deficit to eight, but Garner’s Davon Newton countered with a three of his own.

“In the second half things fell apart,” Panther Creek coach Shawan Robinson said. “They were hitting shots and we didn’t.”

Allen, who had 13 points at the half, went on his own personal run, knocking down a three, and moments later, getting a steal and layup to give Garner a 17-point lead with 2:39 remaining in the third quarter. The Trojans led by 18 after three and cruised in the fourth, outscoring Panther Creek 20-16.

“We were looking to attack and really close the game out,” Abrom said. “We were focused on finishing the game strong.”

The Trojans did finish strong on the boards. Garner had 20 offensive rebounds – the Catamounts had 20 total rebounds the entire game. The Trojans finished with 47 boards.

“We like to play up tempo, and if we don’t get rebounds we don’t run,” Gray said.

Robinson felt like his team started playing well, saying the opening minutes were “nip and tuck.” Before he knew it, Garner was up 20-9. Even still, the Catamounts didn’t panic, fighting back into the game, but in the end, the Trojans were too deep, and too talented on the offensive end.

“We didn’t start out like I wanted,” Robinson said. “I felt like if we started doing what we were supposed to do we would have cut into the lead a little bit more.”

Monday will feature a matchup of defending NCHSAA state champions as Garner, the 2015 4A champs, battles Terry Sanford, the winners of the 2015 3A crown, at 3:30 p.m. The Catamounts will take on Leesville Road at 10:30 a.m.

“We can’t play at their style,” Gray said about the Bulldogs. “We can’t play a halfcourt game. We have to try and make them play at our tempo and we can’t let their size intimidate us inside. You know, 3A and 4A ball is not a lot of difference, you can’t play but five at a time.”

,Garner High School led every minute of its games versus Panther Creek, and even though the Catamounts hung around early, the Trojans were too much to handle, pulling away late for a 85-63 win.