Ravens pull away from Broughton for Holiday Invitational win 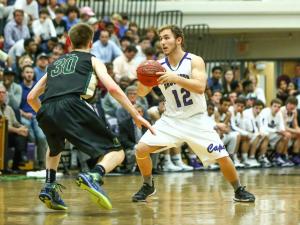 Raleigh, N.C. — Despite nine lead changes, the Ravenscroft Ravens were able to outlast the Broughton Capitals 64-55 on Saturday in the David West Bracket of the HighSchoolOT Holiday Invitational.

After a back-and-forth first quarter, the Ravens were able to break out in the second, creating an 11-point lead.

The Caps scored just 12 points in the second quarter and ended the first half down 34-26. Broughton coach Jeff Ferrell said that his team is “still trying to figure out how to play tough for four quarters,” also mentioning that they “aren’t the team that can take plays off.”

Broughton had nine turnovers in a mistake-riddled the first half, something coach Ferrell alluded to after the game.

Ravenscroft was outscored by Broughton in the third quarter, but maintained a 4-point lead going into the fourth. Michael Okaura of Ravenscroft had 9 points and an assist in the second half for a total of 19 points and 4 assists on the game.

Billerman was happy with his team’s effort, saying that even though the team is lacking in size, they have “a number of skilled players who can handle the ball, pass the ball, shoot the ball.”

Ravenscroft will play on Monday at 1:50 p.m. against Voyager Academy.

,Despite nine lead changes, the Ravenscroft Ravens were able to outlast the Broughton Capitals 64-55 on Saturday in the David West Bracket of the HighSchoolOT Holiday Invitational.

Help Your Town: Apply for an Advisory Board