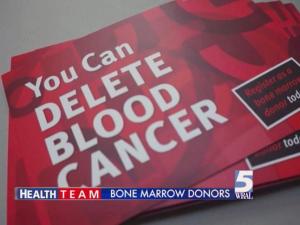 Raleigh, N.C. — An unidentified cancer patient recently found a potential bone marrow donor through a registry that was started to help find a match for a Raleigh superior court judge with blood cancer.

The patient and unidentified potential donor registered during one of the “Save the Fox” bone marrow donor drives in the Triangle area, originally for Superior Court Judge Carl Fox.

Fox, who had a form of blood cancer called myelodysplastic syndrome, became too sick to wait for a bone marrow donor match himself. Instead, Fox received a stem cell transplant at the North Carolina Cancer Hospital using umbilical cord blood. He’s now home recovering with positive signs that his cancer is gone and his new immune system is working.

Meanwhile, the judge hoped for good news for other patients in need. Now he knows, from donor drives in his name, that another patient with blood cancer has hope.

Murray said it’s just the beginning of the process for that potential donor.

“That donor starts going through some work up, which means they’ll do some additional blood tests,” Murray said. “They’ll make sure that they are the perfect match for that patient.

Donors will be scheduled for going to the nearest available collection site, which could be in the Triangle area. If local options aren’t available, the donor can be taken to a place like Emory University in Atlanta, Georgia, or Georgetown in Washington, D.C.

There are two ways to donate: The most common method is peripheral stem cell collection, which is done 75 to 80 percent of the time. It’s a simple needle in the arm, removing the stem cells from the blood and returning the red cells to the other arm, which takes about 4 to 6 hours, Murray said.

About 20 to 25 percent of the time, though, donation is through bone marrow, which is done as general surgery. The donor is unconscious while a needle is placed in the pelvic bone, extracting bone marrow stem cells.

Bone marrow donors might wake up with a sore tailbone, but also with the satisfaction that they might save a life.