Always willing to take the blunt end of the stupid stick we have an open policy for readers to ask us questions here. The reference to the stupid stick is directed entirely at us at Wake Forest News.

Typically when a question comes in our general reaction is, “damn, don’t know again,” and off we go to pester someone for an answer. We don’t even know why we even bother to think we might know the answer.

Today we received a question about Mike Cole who is running for Wake Forest Town Commissioner. We are not sure if this was part of the trick-or-treat festivities last night but a chance encounter with Cole on a dark street drew the following head scratcher for us.

“I am so glad to have found your “news” site! I loved your article on our local candidates for mayor, and was wondering if you have spoken to the town board candidates. My curiosity was peaked during a trick-or-treating encounter last night.

Yesterday while trick-or-treating I met and spoke with Mike Cole. He was very courteous and even offered to push my stroller.

[Cole] mentioned to my husband and I that he was running because the town has been “spending money without thinking about it first”.

I personally hadn’t been aware of any spending I’d consider frivolous, and found the town to be quite frugal in my time. Of course I wanted to know if our elected officials had started throwing money around, so I requested examples from Mr. Cole.

Mike Cole gave two examples. The first was that the town was spending $400,000 for the design plans for a small section of greenway running behind Tyler Run up to Durham Road. I did mention that greenway backs to my property and had been in the plans for over 10 years, and I support it. However, Mr. Cole stated it was only to draw up blueprint plans. I do agree $400K to draw up some plans without building anything does sound excessive. Is it possible to get more information on this issue?

The second example was that the Town Board commissioned 3 pieces of art for the downtown revitalization costing $100,000 total. However, he stated the bill for the art came in at $135,000, and the town paid the additional cost without question.

Could you get any information on his two examples? Like…stat…since the election is Tuesday???

LOVE your site…your article on our WFPD SWAT mobile had me laughing aloud several times. 🙂” Yea, we included that last line as a gratuitous pat on our own back.

Three or four hours ago we reached out to Mike Cole though his ElectMikeCole Facebook page. 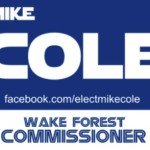 Cole is already one leg up in our book because unlike Bill Randall, Cole at least knows how to correctly spell the name of the Town.

We’ve got to say, while the Town has received some criticism they have not been responsive to addressing resident questions or forthcoming with information, they have been amazing to deal with from our point of view.

While we sat and waited for Cole to contact us we went to the Town for a response. Here is what they offered.

“Your inquiry has created a bit of confusion as town staff is not at all sure where these numbers are coming from.

In regard to the first example, Planning Director Chip Russell says the town is not designing anything behind Tyler Run. He says there may be something in the future but nothing for now, so we’re not sure where the $400,000 figure originated.

Mike Cole may be referring to one of the projects presented at the BOC retreat in September. The design work for the Durham Road Pedestrian Improvements (sidewalks, multi-use paths, and signal upgrades) project is estimated at $415,000. This work is not underway, we just submitted a LAPP grant application yesterday to get that project funded. If we get that grant, our portion of the project would be 20% or $83,000.

As for the downtown public art, the board of commissioners recently commissioned the first two pieces of town-funded public art – the Rain Gate bench, located in the parking lot of the Wake Forest Area Chamber of Commerce, and the Leaf Shade Bench, located in Jones Plaza at the intersection of South White Street and East Jones Avenue. The total cost for the project was $43,000 and was budgeted in accordance with the town’s Public Art Ordinance. For complete information concerning the ordinance, please see the attached document from 2010.

I hope this helps clear up any confusion.”

As far as clearing up confusion, that remains to be seen. We are a poor judge of that goal being accomplished because we exist in a constant state of confusion.