A Wake Forest News reader, Jim, wrote in and wanted to know about the lost Confederate gold buried in Wake Forest. Damn it Jim, that was supposed to be a secret.

Everyone can thank Jim for spilling the beans on that one. Jim, consider your Wake Forest top secret clearance, revoked. 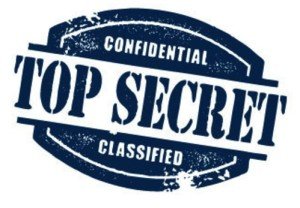 By the way, If you have a question you’d like to ask Wake Forest News, you can do so here. If you insist on asking us if you look good naked, be sure to send pictures.

Jim said, “I have heard that there is buried pots of gold in Wake Forest, NC that was buried by confederate soldiers along a set of railroad tracks in 1864. Supposedly there was two flat cars loaded with iron pots filled with gold coins with the lids wired shut. They buried 3 pots per hole exactly 100 paces off of the tracks. The Civil War was nearing it’s end & the reason they were buried is because Union forces were closing in on them & they didn’t want this to fall into the hands of the Union.”

Now there is an interesting question worth spending some time investigating. Of course seeing how we are going to do the investigation, we’ll get first crack at any hidden gold.

On first glance the legends, folklore, and rumors seem to support such a possibility. 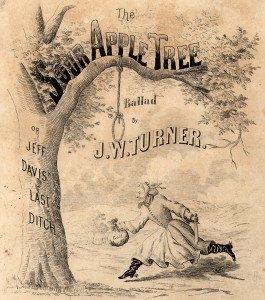 First we turned to Carol Pelosi of the Wake Forest Gazette and she shared what she knew about the rumor.

“What was buried was the family silver, any money left after a time of hardship and privation and even hams and other foods by the local people before the Federal troops came through.”

Carol said, “Now there are some people who have stories handed down about how the Federal troops came up three roads — Falls, what is now US 1 mostly, and the NC 401 route toward Louisburg — straggled all out along the way, left lots of buttons, bullets and other stuff that’s still being found.”

Family silver huh? That could have some value. Interesting.

But what does Carol know, it’s not like she wrote the Wake Forest history book. Oh crap, she did. You can buy your copy here just in case you don’t visit a local doctors waiting room anytime soon to read it for free. We have a copy and still waiting to get Carol to sign it.

The Wake Forest Historical Museum had stories to share as well. According to the group, “All the school’s students but five were conscripted into the Confederate Army, and the College was forced to close in 1862.” So there wasn’t much left there to go on.

However we did come across a very interesting diary of a women who lived in Wake Forest at the time Jim was wondering about.

The diary of Nannie Elizabeth Trantham, a young resident of Wake Forest during the Civil War, said, “My father, exercising his usual shrewdness, in anticipation of the coming of the Yankees, cut out a section of the floor in his large bedroom and secreted a great many things which were liable to be confiscated by the “bummers.”

The house appears to have been located near the northeast corner of the small Wake Forest College at the time of the Civil War.

Quick, where did we leave our shovel? For those that don’t have gold digging shovels, be sure to get one at B & W Hardware.

Maybe we were on to something. That entry sounded promising. Mentally we were already spending the money we’d find. Things like a free round of drinks at White Street Brewing Company or giving away free hot dogs for life at Shorty’s Famous Hot Dogs, seemed reasonable. Or maybe a weekend country home in Louisburg.

Unfortunately we kept reading and uncovered the secret treasure Nannie’s father so astutely buried was a ham. He also managed to to hide some rice, flour, sugar, coffee, tea and lots of cloth. Yes, you read that right, a ham, a “Yankee” ham. That’s the big treasure?

“My mother, with her usual forethought, had a quantity of food cooked, to be ready for any emergency, I remember that she had a large ham cooked which we children called “the Yankees’ ham,” and it was not to be cut till they came.”

The size and value of this hidden ham raises questions. How freaking big was this ham and how much could a 150 year old ham be worth today?

Nannie says, “My mother being very delicate and unable to lift heavy things, my father carried them to the edge of the opening in the floor, and then went down under the house, and my mother shoved them in to him while he placed them. When he came up he fitted the floor boards in place, tacked down the carpet and placed a bed over the trap door that he had made.”

Well at least this story didn’t end with “My father was killed by a ginormous ham mother kicked in on him.” See, always a silver lining.

Sadly it was not quite the abandoned pots of Confederate gold that Jim heard might be buried in Wake Forest.

Wake Forest in the Civil War

One of the Wake Forest notable residents was Wiley Daniel Jones. Jones served in the Confederate army before becoming a leading Republican in the Reconstruction era. Jones was said to be a welcome addition to the Republicans, “at a time when Republicans were not welcome in the South.” My how times change.

But notables also included African-American resident “Uncle” Nelson Ligon, who spent his life as a slave in the Wake Forest area. Ligon was the founding member of the Called Friendship Chapel Baptist Church, which was constructed after an “unnerved white congregation” watched Ligon jump from the balcony into the white audience during a spiritual moment at the Forestville Baptist Church. After that incident it is said the congregation “quickly decided to help Ligon establish his own church.” – Source

“Give That Man a Church.”

Note to self: Apparently if you want to start a church, all you need to do is jump from the balcony into an audience of white people during a service at the Forestville Baptist Church. Good to know.

We did find an interesting item during our research. It was a public mention from Wednesday, November 9, 1864. Sadly it was not a mention of gold passing through town but a notice about how the tax is due the Confederate government from the residents of Wake Forest and other surrounding towns. An entire day is set aside for the Confederate Tax Collector for Wake County to meet with each town and receive the Confederate tax collected. Oh joy.

The “War Tax” rate was about 8% of income. The Confederate Congress also passed a “Tax in Kind” levy in April 1863, which was to amount to one tenth of all agricultural products. These items included wheat, oats, rye, cured hay, and wool. Sound like Civil War tithing to us. – Source

A North Carolina listing of items included in this tax stated the value of the following would be used in the calculation of Confederate Tax due.

Oh, and don’t forget, “Land, Slaves, Cotton and Tobacco purchased since the 1st day of January, 1864, must be listed at the amount paid for them.”

Even our own Wake Forest Cemetery hosts the remains of Confederate soldiers.

For the most part it appears the most excitement that happened around Wake Forest during the Civil War was when the Wake Forest College students left to join the Confederate forces so they could “whip the Yankees before breakfast,” as Nannie wrote. How’d that work out?

In the last year of the Civil War the college was taken over as a hospital for sick and wounded Confederate soldiers. No pots of gold buried there.

The Civil War came to an end in Wake Forest about 7 AM on May 1, 1865 when Yankee soldiers began passing through Wake Forest. This was about a month after the official end of the war which is generally thought to be April 9, 1865.

Ironically at the end of the war the only soldiers in Town were actually Union troops who were invited in by Wake Forest residents to protect local residents.

Logically, Confederate troops certainly passed through or returned home during that time so maybe there is still some hope of finding that buried gold.

So Where is the Confederate Gold Then?

According to the Southern Sentinel the rumored Confederate gold never made it’s route anywhere near Wake Forest. 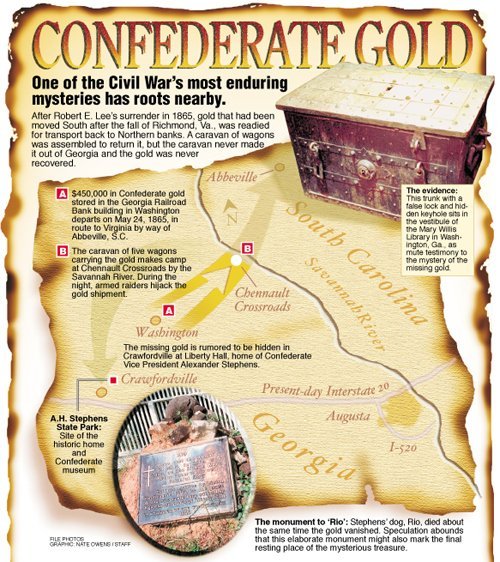 Of all the stories we found in our research, most seemed to focus on a route from Georgia to Charlotte, North Carolina and not over on our beautiful section of the State.

Some of the other rumors include:

So there it is Jim. While we appreciate your asking your question we are sorry to say there is little evidence to support the location of any gold other than that we found during the writing of the article. First round is on us.