Hot Air Balloons Falling In Neighborhoods All Over Wake Forest

This past Saturday afternoon a hot air balloon landed in a neighborhood in Wake Forest. (Update 11-19-2013 We originally said an “errant hot air balloon fell on a neighborhood” but changed it because we thought this way read better. But Kent said “aren’t journalists supposed to acknowledge when they make factual changes like this,” see his comment below. So since he later objected to the wording we now feel compelled to explain what we meant by it since he’s calling it untrue. The word errant was used to define the unexpected arrival of the traveling or wandering balloon by the good folks on Foxbridge Court. We are sure they did not expect it to drop in. You know, errant as in moving about aimlessly or traveling or given to traveling. The use of the expression “fell on” was simply a description of what happens when something drops or descends from the sky. You know, like rain falls from the sky. The balloon fell from the sky to the ground. It didn’t walk from the sky or skip, it fell from the sky. That’s not a reflection if the balloon was controlled or uncontrolled, just an observation of how that pesky gravity thing works. Hope that clears it up for you Kent.) Thanks to an awesome Wake Forest News reader, Michael Evans, who alerted us by sending us a message on Facebook and then he sent in this photo to prove it. Actually Michael’s wife Michelle took the picture and we must absolutely thank her for doing that.

This balloon came to rest on Foxbridge Court in Flaherty Farms subdivision.

But in an interesting twist, Elizabeth DySard, another awesome reader, said this wasn’t the first time this has happened. She even sent in the following photos she snapped a few weeks ago to prove it.

The Sky is Really Falling

That time the balloon landed in the Jones Dairy Farm subdivision on Sweetclover Drive. We don’t know if it is a function of the camera that took the pictures but check out how close it appears the pilot came to the high power lines in the photos below. That looks like it could have been a very unfortunate landing. 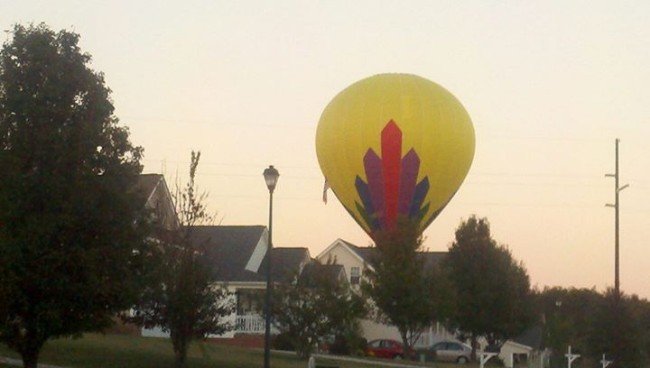 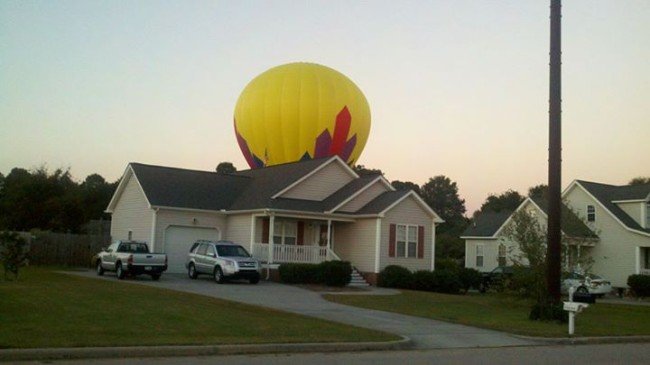 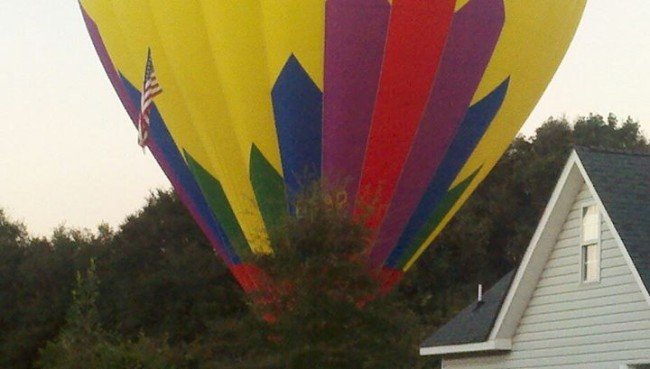 Apparently the hot air balloon pilot loves to land in neighborhoods in Wake Forest. Let’s just hope this isn’t his way of commuting home from work. If so, this is guaranteed to get messy.

Readers say they’ve seen the same balloon a few times a week in the sky over/near Wake Forest. Maybe it is from a local company giving hot air balloon rides? Who ever this is it’s not going to end well if they can’t stop landing in the hoods.

Keep your head on a swivel and don’t forget to look up, you never know what’s falling from the sky in Wake Forest.

Thanks to alert reader Aaron we think we’ve now potentially identified the hot air balloon owner as Above and Beyond Hot Air Balloon Company. At least the picture of their balloon is similar. – Source

Aaron said, “We had a hold-your-breath landing in that same balloon about two years ago. We missed the roof of yet another Wake Forest home by about 5ft. It was awesome!”

Another reader Joe Rumfelt reached us on our Facebook page and added this picture as well and said, “I thought she was going down a few weeks ago by Mitchell Mill Rd. But they gave it the gas and went back up.”

Michael Clark also sent in this photo of the balloon taken in September from his yard in Jones Dairy.

According to FAA regulations, hot air balloons must fly more than 1,000 feet above towns like Wake Forest. “(b) Over congested areas. Over any congested area of a city, town, or settlement, or over any open air assembly of persons, an altitude of 1,000 feet above the highest obstacle within a horizontal radius of 2,000 feet of the aircraft.” – Source

Update 11-19-2013 Commenter Kent below says we needed to qualify the quote above and say “except when necessary for takeoff or landing” but he fails to mention the FAA appears to take issue with a blanket exception for a balloon to just takeoff and land anywhere it wants when it is not an emergency. To quote from one of the few FAA Administrative decisions in this situation, they say, “Given the facts as established by the testimony of the two police officers, the FAA inspector, and respondent himself, the two landings in the City of Escondido occurred in congested areas that, based on Board precedent, were not appropriate for takeoff or landing. Both landing sites were unsuitable due to their close proximity to powerlines, buildings, and trees and the availability of alternative sites. Respondent was not faced with an emergency situation, but instead was anxious to please his customers and provide each with a 30-minute balloon ride. As such, the low flights were not necessary for takeoff or landing, within the meaning of the regulation.” And in another case, “”In the context of balloon flight, we refer to Administrator v. Rees. In Rees, the respondent’s commercial pilot certificate was revoked for violations of sections 91.119 (a), (b), and (c), and 91.13 (a) in connection with four incidents of operating a hot air balloon in low flight. We determined that the appropriateness of the landing site, ‘in terms of the necessity for landing there,’ is part of the equation when evaluating a pilot’s landing choices. Similarly, in Administrator v. Cory the respondent operated a balloon in low flight over residences and other structures and landed in a parking lot near cars and light poles. The Board found that the law judge correctly considered the suitability of the landing site in his analysis when he concluded that respondent’s low flight was not necessary for landing. If the landing site is inappropriate under the circumstances, then the low flight cannot be excused under the regulation as necessary for landing. – Source

“[In] Administrator v. Van de Hoef where a balloon pilot was found to have operated above a congested area below an altitude of 1,000 feet above the highest obstacle. Specifically, he operated the aircraft over Seattle, Washington, and landed in a northwest suburb of the city. We agreed with the law judge that both the takeoff and landing sites were inappropriate and, thus, did not involve permissible low flight. Just as in the instant case, while the low flight may have been a prerequisite to the questioned landing, that landing itself was inappropriate.”

Since there is a difference of opinion we reached out to the media office at the FAA for clarification and received a response that the FAA is “investigating the reported balloon operations.” We will give you an update when we get one. In the meantime if you want to read more about this see “Choose Your Landing Site Carefully” from Balloon Life.

And just for the record, we are pilots ourselves, far from prudish and are all about doing whatever you want to do in a hot air balloon, except keep landing in Wake Forest hoods.