The mayoral elections are over so let’s move on to the next most apparent divisive topic in Town, the proposed Wake Forest Fire Department Station 4.

The talk and rhetoric about this proposed station have been heated by some and others have had feelings bruised while voices have been raised.

And while we are absolutely not taking any sides here, we just wanted to offer up our own observations and feedback on this topic.

The concern by some is the new station will diminish property values and be loud.

Admittedly we’ve got a somewhat different perspective on this issue because we respond to many fire department events to cover them. And one key point that some opponents may not appreciate is how long it can take to travel from one side of our Town to another, even with lights and sirens.

In a perfect world we’d all have a firefighter/paramedic tucked in the basement who could pop out when you need them most. And it seems the rule of first responders is you never need them till you need them.

When they are disrupting your travel they are a pain in the ass. But when they are headed to your house they can’t be there fast enough.

We speak from experience on that subject. In the last year we had a need to call WFFD to help us deal with a car fire. It seemed to take forever for the truck to arrive from Station 1. That’s simply because we live in the northwest part of the WFFD coverage area. They did the best they could do but those trucks can’t fly, yet.

Does Wake Forest need another station? The logical answer would be we don’t because technically nobody needs a fire station, but they sure are nice to have around in an emergency.

But that’s really not the right question. The better question to ask is if people who live in the northwest side of the WFFD coverage area deserve better response times.

The illustrations below are not based on fancy GIS information plotting, just our little attempt to draw maps to help understand the situation better. Truly if we were going to prepare an exact coverage map we’d factor in things like population density, road speeds, traffic conditions, etc. But for the sake of illustration the images below seem reasonable and fair.

The first thing you might notice is that the Wake Forest Fire District is much different than the Town map. Wake Forest Fire Department is responsible for homes all the way down inside I-540. That would be unexpected for most people. Luckily for people on the southwest side of the fire district, Station 5 is located right on Falls of Neuse Road with good access and a wide road. They can make it pretty fast, and those guys are fast, up and down the territory nearest to them.

Until you’ve actually dealt with a situation when trucks from Station 1 are out in the eastern side of the coverage area and you start having chest pains so they then get dispatched all the way over to the western side, you simply can’t appreciate how long that can take. Too much time can mean a life lost.

How long are you willing to wait if you are having a heart attack, you are choking, or your house is on fire? If you are prepared to wait an extra five to ten minutes than this whole thing just isn’t an issue. Don’t build it.

Headed west from our fire district there isn’t much in the way of nearby mutual aid that can respond. Stony Hill would be the next nearest station and they would be far off the map to the west.

So Where Do We Best Place the New Station?

Again, turning to logic and looking at the map, the most likely area to serve the northwest part of the fire district would be to have a station somewhat centrally located to the area it would serve. It seems the best place then would be along a road with good access. That road would would not be buried inside a neighborhood subdivision.

The location proposed by the Wake Forest Fire Department seems to be along the only road in that area which is centrally located and meets those requirements.

Maybe we can generally agree that somewhere on Jenkins Road makes sense given it’s location. But if we wanted to be a bit more precise then how about actually the absolute dead center. In that case it looks that would be off somewhere in the woods further south.

Unfortunately there is one huge problem with that location, it looks like it’s in the middle of a freaking forest with no access. Can we at least agree then that’s not a good spot?

The proposed location for Station 4 is at the intersection of Jenkins Road and Fullard Drive in a spot that is now a vacant lot.

And this view is standing in the middle of the lot and looking across the street. The one thing the picture does not show you is the house nearby to the right of the frame. You’ll see it on the illustration below.

So far we’ve shown how the site is reasonable centrally located and there is a vacant lot available to build the station. Oh, and the lot is for sale.

Here is how the proposed Station 4 would fit into the vacant lot.

The design for the station appears to take into account the visibility of the station from adjoining properties. While you would obviously be able to see it from the street, screening with proposed plantings is designed to act as a sight buffer from local residences.

Plantings in the back of the station are designed to provide a similar sight buffer for the folks behind the station.

Here is the best current drawing of the outside of the station at this time. As you can see, the color of the station has taken into account it’s location in the woodsy setting and it appears to have a color palette that would make it less obtrusive. Hey, it’s not flaming yellow. 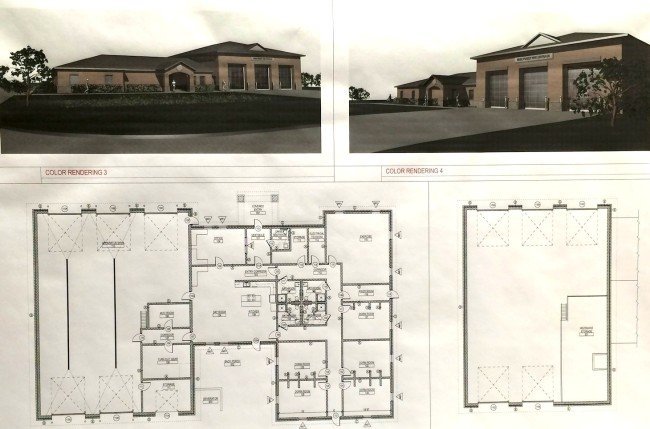 The Objections and Problems

According to a recent Wake Weekly article both sides of this issue are frustrated.

Morgan was specifically looking for areas where homes were sold, a fire station was built, and then they were resold, to determine the station’s effect on property values.

“The properties sold and resold … there is no measurable impact on value,” he said.

He also used a few houses in Wake Forest’s Porto Fino neighborhood adjacent to Fire Station No. 2 on Ligon Mill Road, to illustrate that there was a less than 1 percent loss in value — after the recession and housing slump.

To deal with the issue of fire truck sirens from the station the fire department brought in an audio expert, Norrell Stewart.

Stewart was brought in to refute some of the residents’ claims that fire engines register louder on the decibel meter than trains and perhaps gunshots, noting that each sound has a different standard of how far away the measurement is taken.

“The siren on a fire truck is not quite as loud as a train whistle,” he said.

He also acknowledged that while the sound of a siren diminishes significantly at a distance and off to the sides, it will still be prominently heard by people closest to the future fire station.

Apparently Stewart brought his obvious stick to the meeting. Yes, those people living nearest the station will hear the sirens more. That is an undisputed fact.

But in the grand scheme of things, equipment from Station 4 is not going to be out responding to every call. There are sometimes long stretches of time when life is quiet here in Wake Forest and fire engines are not out responding to emergencies. This just happens to be such a week.

But property values and sound are not the only issues for some.

For example, Wake Weekly reader Lynn Snow (who lives very near the proposed location) said, “[Chief] Early says he wants the fire station on Jenkins because it’s what’s best for the community. Whose community? Is the only entity benefitting from this sweetheart deal the privately owned WFFD, Inc. which would add millions of dollars of assets to their bottom line, all at the Wake Forest taxpayers’ expense?”

Snow also said, “The contract for fire services between the town and the WFFD, Inc. can be terminated by either party upon 90 days notice.

Upon dissolution of the WFFD, Inc., per Item No.10 of the contract between the parties, only the “assets and equipment that are titled in the town’s name shall be returned to the town.”

Upon termination of the contract and/or upon dissolution of the WFFD, Inc. would the town have virtually no fire protection whatsoever?

The documents on file with the NC Secretary of State clearly show that the WFFD, Inc. has not specified that upon dissolution, the town would be the recipient of its multi-million dollar assets.”

It seems the titling issue may also be bigger than some expect. For example, Town fire equipment involved in an unfortunate accident could expose the Town to more liability if they actually owned the equipment.

It is also said if the Town owned the fire department the cost of providing such services would be 50% to 100% higher since the Town would have much higher overhead costs in employee benefits and pensions. Who wants higher tax rates to deal with that?

So What is the Issue Then?

What is the real issue here with the push back to Station 4? There is of course the obvious “not in my backyard” problem. We get that. It’s understandable.

But outside the impact of the nearest residences to the proposed station is there a far greater community benefit to having emergency responders and life saving personnel closer and able to respond quicker?