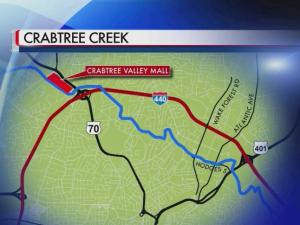 Raleigh, N.C. — People along Crabtree Creek in Raleigh are used to the aftermath of a heavy rain – the creek often overflows its banks and, worse, the sewer system underneath can become overwhelmed.

Construction started last year on a fix, so residents no longer have to dread raw sewage oozing from below. The work is evident at Yadkin Drive and along the Capital City Greenway System near Crabtree Creek. The city is building a new pipe along the creek, extending from near Crabtree Valley Mall down to Interstate 440 in east Raleigh.

Eileen Navarette, ‎construction projects administrator for the City of Raleigh, said wet and wintry weather slowed the project, but it is on track for a 2018 completion.

Crews are tunneling under roads near the creek to add drainage capacity while avoiding any disruption to the traffic above.

“This is a large pipe, 54 inches in diameter, 25 to 30 feet deep in some places, so we’re using special technology to get under these roads without having to close them,” Navarette said.

Crews are finishing a tunnel under Capital Boulevard near Hodges Street that closed some streets and greenways in recent months, but Navarette says people have been patient.

“A lot of the people who use the greenway are the ones who have seen the sanitary sewer overflows, so they understand how important it is for us to stop this from happening,” she said.

The city posts project updates online so that area residents can track its progress.

,Construction started last year on a flooding fix, so residents no longer have to dread raw sewage oozing from below. The work is evident at Yadkin Drive and along the Capital City Greenway System near Crabtree Creek.